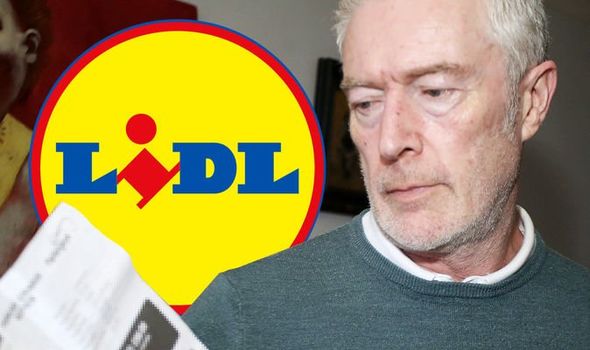 Tony Reid, 54, claims to have made two separate visits – both short – to the supermarket in Greenock, Inverclyde, on January 15. His first visit took place at around 9am – his second after 1pm. Despite driving away from the supermarket’s car park between the two visits, Mr Reid told SWNS news agency he was slapped with a £90 fine.

He believes the cameras operating at the car park failed to record him leaving after his morning trip.

This would mean the computerised system issued a parking penalty on the understanding the man’s car remained parked until 1.30pm.

Mr Reid claims to have receipts to prove he visited the supermarket on two separate occasions that day.

He was quick to look for a solution when the fine came to his attention, attempting to contact both Lidl and ParkingEye, the car park operator.

He was not able to file a complaint with either.

Failing this, he approached staff in the Lidl store to ask for help from the manager, but these too, he claimed, were “dismissive”.

He added that both the staff and their manager made it clear they were unwilling to help.

Mr Reid said: “Staff were really dismissive of me in store.

“I didn’t expect them to set everything right, but the manager I spoke to just wasn’t interested in helping me.”

He added that a supermarket as respected as Lidl should not be using ParkingEye as its car park operator due to “thousands of bad reviews”.

He said: “The car park operator… has thousands of bad reviews online so I don’t understand why Lidl use them.”

Whatever the reason, Mr Reid insisted he would “never shop at Lidl again…

“I’m furious that a big company like Lidl has been so difficult.

“I spend about £300 a month in their shop and they’ve just wiped me off like I’m nothing.”

In response, a spokesperson for Lidl GB told SWNS the dissuasion was “disappointing”.

They said: “Our car park management systems are in place to help ensure availability of parking spaces for our customers, and it’s therefore disappointing when we learn that a genuine customer has received a parking charge notice.

“In the extremely unfortunate event that a customer believes they have wrongfully received a parking charge, we would encourage them to get in touch with ParkingEye directly via the appeals process and explain their situation.

“Charges can be investigated and if necessary, cancelled as swiftly as possible.”