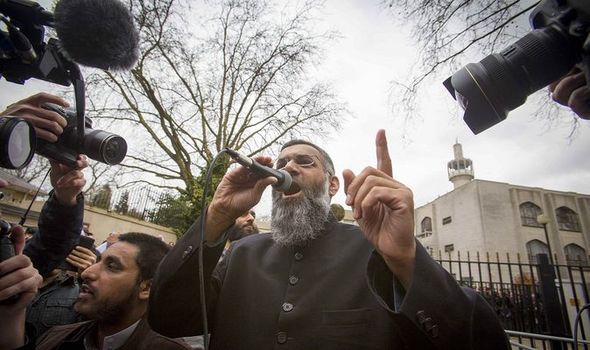 But anti-extremism analysts say they fear he could be trying to launch a group similar to the banned Al-Muhajiroun organisation after he met up with a key associate once jailed for terror fundraising and incitement to kill British soldiers. The Sunday Express has discovered Choudary – jailed for five and a half years in 2016 for inviting support for Islamist terrorists – has met former members of the group since he was released from his licence conditions in July.

The ex-lawyer told us he had been catching up on “old times” with close friends, including Abu Izzadeen, a convicted terrorist, and Islamic activists such as former boxer Anthony Small, 40.

Izzadeen, real name Trevor Brooks, 46, once famously heckled former home secretary John Reid at a community meeting in east London. He was jailed in 2008 for fundraising for terrorism and inciting attacks against US and UK forces in Iraq.

And in 2016 he went back behind bars for two years for breaching the Terrorism Act by leaving the UK illegally. Choudary also says he has plans to meet up with his codefendant in his 2016 trial, Mizanur Rahman, 38, a man dubbed “more dangerous than Choudary” by security services.

Choudary, 54, said: “I have met loads of people, a lot of people I used to know. I’m back in contact with them. Nothing more than catching up. It’s been seven years. Yes, I’ve seen Abu Izzadeen a few times, yeah. I saw him a few weeks ago – before that it was 2015. He is brilliant. Absolutely fantastic. A lovely man. He is a very close friend of mine.”

He went on: “The important thing with Abu Izzadeen and even Mizanur Rahman is that the views that we hold, and I can speak for all of them, are based on very, very clear, defined scripture. No amount of talking to by theologians or police officers or judges is going to change those views and therefore it became about a clash of civilisations. Islamic culture and Western culture.”

“I have not seen Mizanur yet but I’m sure I will. I’m sure the police are aware of all this. I bumped into Abu Haqq [Anthony Small] at a funeral recently. I have seen these people socially at cafes and restaurants. They are friends and our families are friends.”

Abu Izzadeen said: “Al- Muhajiroun was disbanded. It was banned. It is not going to happen. But as individuals we have the right in the UK – and a divine right – to speak out. They are never going to stop the dawah and the call for Islam. I’m always pushing for us to come out in society and challenge the dominant thoughts and ideas. We want to offer an Islamic alternative and the good thing about my close brother Anjem Choudary is he wants exactly the same.”

He added: “Of course they [the security services] will be following me about. They have to, don’t they? It is part and parcel of their job.”

Prof Anthony Glees, from the Centre for Security and Intelligence Studies at the University of Buckingham, said: “Choudary seems to be indicating he intends to relaunch the highly dangerous Al-Muhajiroun network together with Abu Izzadeen and other associates.

“The group was formally proscribed a decade ago but has since been connected with several major terror atrocities including the 2017 London Bridge attack, led by an ALM member, and the 2019 Fishmongers’ Hall double murder led by another member of the group.

“Choudary will say he is simply exercising his right to freedom of speech but no one is entitled to use free speech to incite others to violence and if his aims are unlawful the Home Secretary should act to do what it takes to stop him in his tracks.”

Sam Armstrong, of antiextremism think tank the Henry Jackson Society, called Choudary dangerous and warned: “It is of paramount importance that security services continue to monitor Choudary and his associates to prevent them from regrouping and radicalising a new generation of young Muslims.”

Is the EU’s tough stance on Syria unravelling?

Former royal aides’ Meghan ‘regret’ over not speaking out earlier