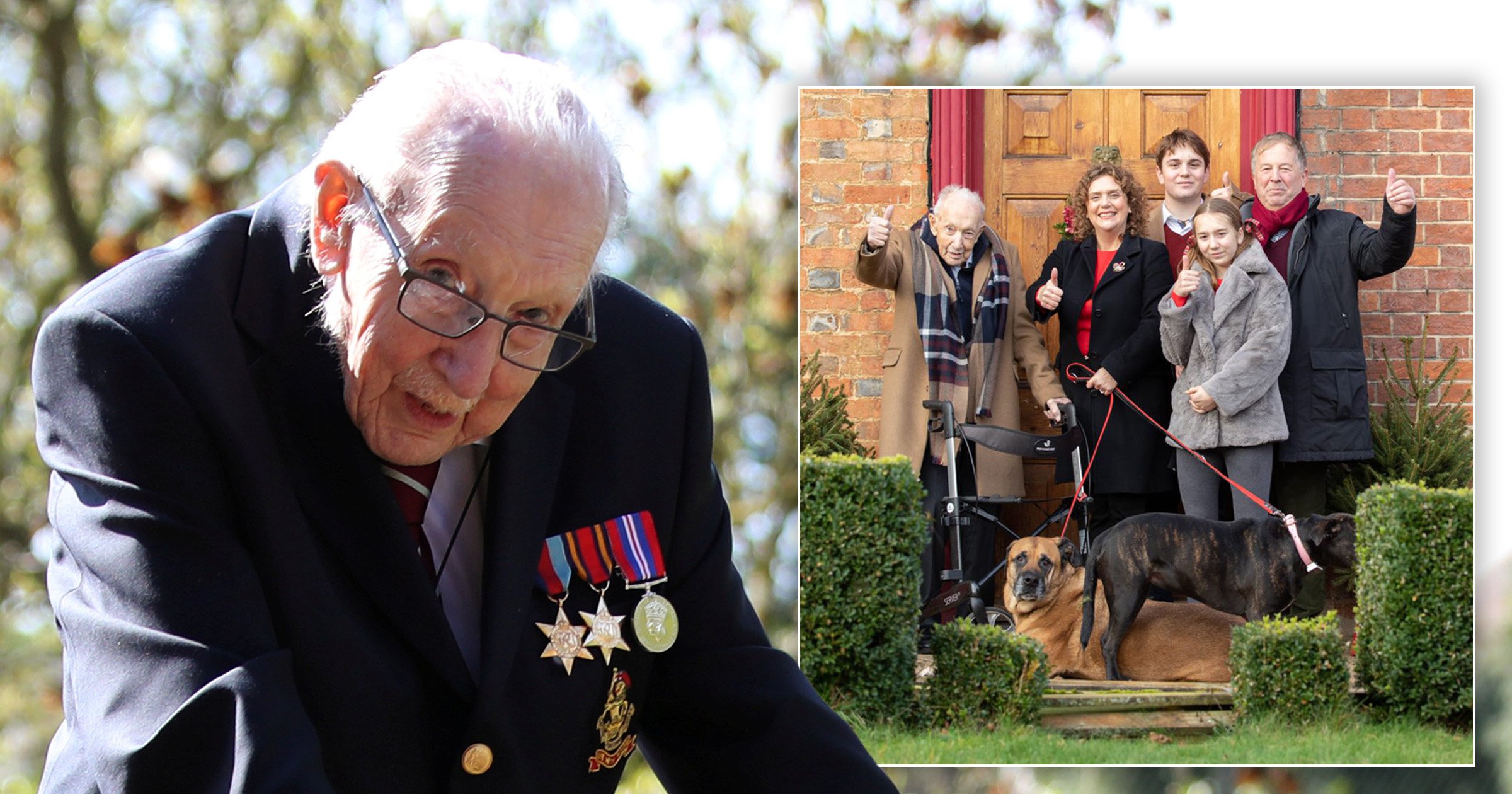 The late Captain Sir Tom Moore was surrounded by family in the final picture taken of him before his death.

The war veteran, who raised more than £32 million for the NHS during lockdown, gave a defiant thumbs-up to the camera alongside his grandchildren, Benjie and Georgia, daughter Hannah Ingram-Moore and son-in-law Colin Ingram.

The photo was released on January 18, just under two weeks before he was admitted to Bedford Hospital in Bedfordshire with pneumonia and Covid-19.

Hannah, Georgia and Benjie were able to be with Sir Tom at his bedside during the last few hours of his life, joined by his other daughter, Lucy Teixeira, via video-call.

On Tuesday the official Twitter account for Sir Tom shared an older image of the decorated veteran dressed in a suit wearing his WW2 service medals.

It was taken as he completed his 100th lap around his garden, which raised almost £33 million for the health service.

He had successfully challenged himself to walk the laps before he turned 100 last April.

The NHS led tributes to the pensioner, tweeting in response: ‘Thanks for everything Sir Tom’, with a heart emoji.

In a statement announcing his death, Sir Tom’s daughters said: ‘It is with great sadness that we announce the death of our dear father, Captain Sir Tom Moore.

Recalling their time at his deathbed, they said: We spent hours chatting to him, reminiscing about our childhood and our wonderful mother. We shared laughter and tears together.

‘The last year of our father’s life was nothing short of remarkable. He was rejuvenated and experienced things he’d only ever dreamed of.

‘Whilst he’d been in so many hearts for just a short time, he was an incredible father and grandfather, and he will stay alive in our hearts forever.’

‘The care our father received from the NHS and carers over the last few weeks and years of his life has been extraordinary.

‘They have been unfalteringly professional, kind and compassionate and have given us many more years with him than we ever would have imagined.

‘Over the past few days our father spoke a great deal about the last 12 months and how proud he felt at being able to leave behind the growing legacy of his Foundation.

‘We politely ask for privacy at this time so we can grieve quietly as a family and remember the wonderful 100 years our father had. Thank you.’

Tributes flooded in for Sir Tom over the course of the day, with the Queen sending a ‘private message of condolence’ to his family.

In a statement, Boris Johnson called Sir Tom ‘a hero in the truest sense of the word’ and called him a ‘beacon of hope for the whole world’.

‘In the dark days of the Second World War he fought for freedom and in the face of this country’s deepest post-war crisis he united us all, he cheered us all up, and he embodied the triumph of the human spirit.

‘It is quite astonishing that at the age of 100 he raised more than £32 million for the NHS, and so gave countless others their own chance to thank the extraordinary men and women who have protected us through the pandemic.’

For all the latest news and updates on Coronavirus, click here.

Lockdown four tests: The FOUR criteria we must meet for lockdown to be lifted