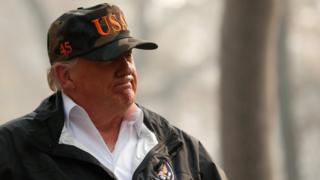 Finns have been baffled by US President Donald Trump’s comments praising the country for managing its vast forests by raking.

Citing a conversation with his Finnish counterpart, Mr Trump said they spend “a lot of time on raking and cleaning”.

But President Sauli Niinisto told a Finnish daily he could not remember talking about raking when the two met.

Firefighters in California are currently battling the deadliest blaze in the state’s history.

Surveying the damage on Saturday, Mr Trump revisited his claim that poor forest management was to blame.

“You look at other countries where they do it differently, and it’s a whole different story,” he said.

“I was with the president of Finland, and he said: ‘We have a much different [sic]…, we’re a forest nation.’ And they spent a lot of time on raking and cleaning and doing things, and they don’t have any problem,” he added.

But Sauli Niinisto told the Ilta-Sanomat newspaper raking had not come up when they talked.

“I mentioned [to] him that Finland is a land covered by forests and we also have a good monitoring system and network,” he said.

Aberdeen: Men who dropped sofa 16ft on top of woman as they removed it from flat spared jail