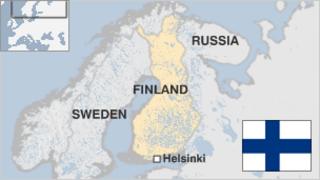 Finland marked it’s first century of independence in 2017 and, in spite of its relatively small population, is a world leader in many fields.

Prominent ratings by various agencies describe it as the among the most stable, free and safe countries while it is ranked as one of the top countries as far as social progress is concerned.

Its national assembly became the world’s first parliament to adopt full gender equality, granting men and women the right not only to vote but also to stand for election in 1906.

Finland declared independence from Russia in 1917. But following its defeat at the hands of the Soviet Union in the Second World War, the country endured strong influence from Moscow during the Cold War.

It was only when the Soviet Union collapsed that Finland was able to completely break free again.

Sauli Niinisto (left) won the presidential election in 2012 to become the country’s first conservative head of state in five decades.

He is the first president from the conservative National Coalition Party since 1956, and the first in 30 years from a party other than the Social Democrats.

The victory of the pro-Europe politician suggested that voters wanted to keep the country in the eurozone despite misgivings over European Union bailouts.

Mr Niinisto is credited with leading Finland’s economy towards growth following the collapse of the Soviet Union, during his tenure as finance minister from 1996 to 2001.

Finland’s president has a largely ceremonial role with fewer powers now than in previous decades, and is not directly involved in daily politics, but is seen as an important shaper of public opinion.

He heads a coalition government made up of the Centre Party, the Finns Party and the National Coalition Party.

In 2016, he faced accusations of trying to suppress an online report by public broadcast YLE of an alleged conflict of interest relating to his family; he insisted he did not try to influence the editor into taking down the story.

Described as a millionaire, Mr Sipila made his fortune managing several electronics and financial services companies in the late 1980s and 1990s.

He entered politics in 2011, becoming a member of parliament for the first time, and a year later was elected chairman of the Centre Party.

Finland has made broadband access a legal right for every citizen.

By 2015 more than 93% of the population was online, one of the highest rates of internet penetration in the European Union.

Some key events in Finland’s history:

1809 – Finland is ceded to Russia by Sweden, which has dominated the country since the 1300s. The Finns retain a considerable amount of autonomy.

1899 onwards – Attempt at Russification of Finland, including conscription of Finnish men into the Russian army and the imposition of Russian as an official language. Campaign of civil disobedience begins.

1906 – Parliament Act establishes universal suffrage, including the right for women to stand for elected office, for the first time in Europe.

1917 – The Russian Revolution allows Finland to declare its independence.

1939 – Winter War: Despite fierce resistance to invading Soviet troops, the Finns are forced to concede 10% of their territory.

1941-44 – The Continuation War: Conflict between Finland and the Soviet Union during the Second World War, which ended in an armistice and Finland having to pay reparations.

1948 – Finland signs friendship treaty with the Soviet Union, and throughout Cold War pursues a policy of friendly neutrality towards Moscow.

1992 – Friendship treaty with Soviet Union of 1948 declared null and void following the collapse of the Soviet Union. Finland turns increasingly towards the west.

Chancellor’s Race Presents Germans With a Challenge to Change