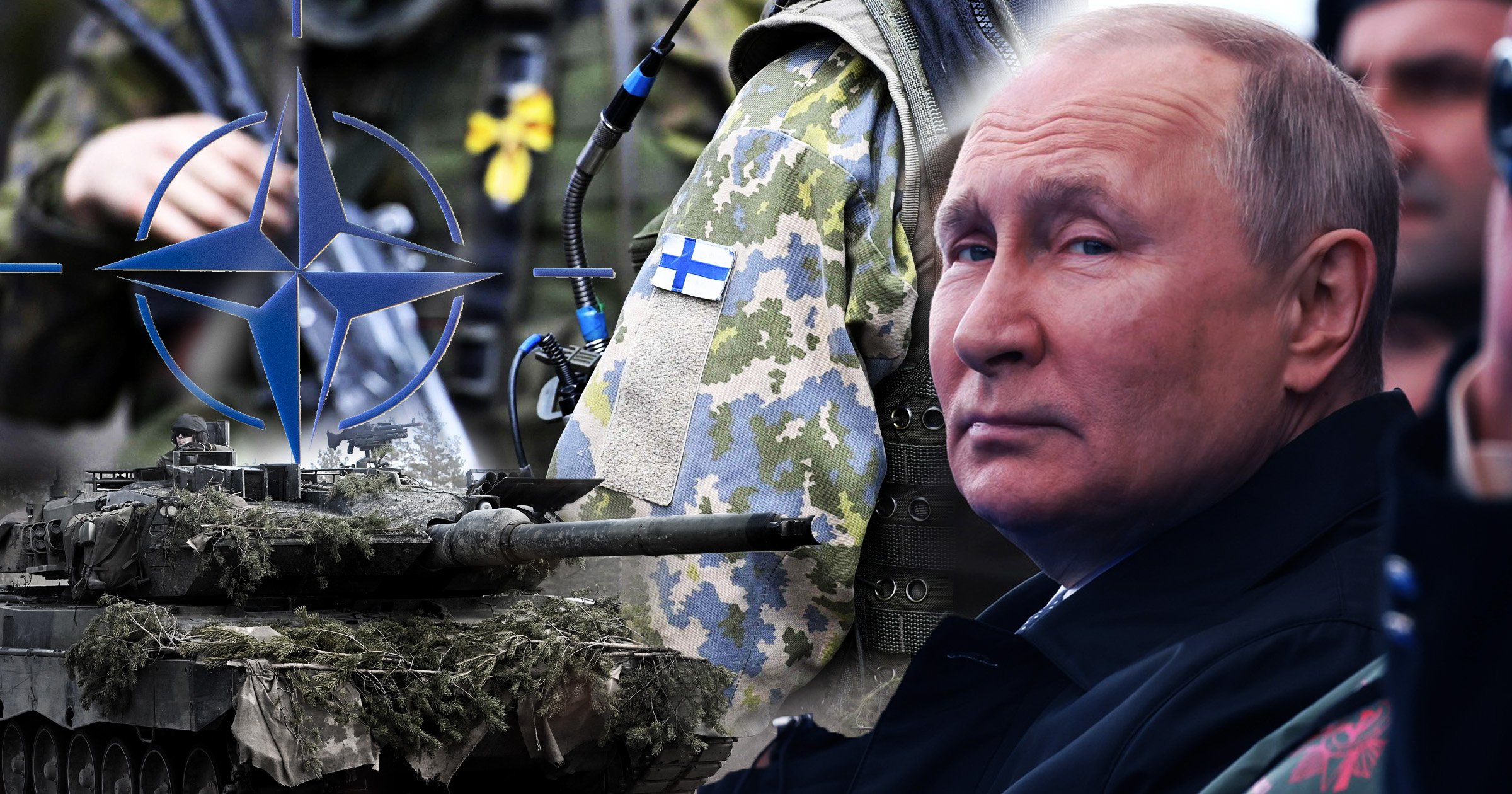 A ‘grey zone’ war is predicted to play out along a vast stretch of Nato’s expanded border with Russia as Finland embarks on a path to joining the military alliance.

The Nordic country will immediately become a key member nation at the forefront of a strategically realigned Europe, a defence expert said.

Benedict Wilkinson, deputy director for defence at research organisation RAND Europe, spoke after Finland’s president and prime minister said an application would be submitted within days.

The move follows the Russian invasion of Ukraine and the Kremlin’s wider hostile activities across Europe, and is expected to be followed by a similar application from Sweden.

Mr Wilkinson, who appeared before the House of Lords International Relations and Defence Committee this week, said: ‘Once it’s ratified Finland, quite uniquely in the history of Nato, will immediately become one of the most important member nations.

‘The new member will bring a border spanning roughly 1,350 kilometres with Russia and a very large army with a key role to play.

‘It will suddenly become an incredibly powerful player in Nato. There is a question here for Nato about how it absorbs and helps Finland as it leaps to the top of the priority list.’

The prospect of Finland and Nordic neighbour Sweden joining Nato, a process which could take up to a year, has drawn continued belligerent rhetoric from Moscow.

Kremlin spokesman Dmitry Peskov said today that Helsinki’s announcement was ‘definitely’ a threat and would be met with a response.

Asked what form this would take, he replied: ‘Everything will depend on how this expansion process of Nato expansion plays out, the extent to which military infrastructure moves closer to our borders.’

The European countries were militarily neutral during the Cold War but became partners with the alliance – meaning they receive briefings but do not take part in military exercises – on joining the EU in 1995.

In April, a former British Army officer told Metro.co.uk that Putin’s ‘military gangsterism’ was pushing the Baltic nations towards the security pact.

Mr Wilkinson testified before the Lords this week on the UK’s defence strategy and capabilities, taking in the Russian invasion of Ukraine which has drastically changed the strategic landscape across Europe.

‘There will be a rocky period between Finland’s announcement of the intention to join and actually joining,’ he said.

‘Finland and Sweden look to be more fragile because they are not covered by the Article 5 security guarantee so Russia is likely to be at its most aggressive in that period as it tries to deter and dissuade these two countries from becoming members.’

Boris Johnson has provided some interim cover by signing security pacts with his Swedish and Finnish counterparts during visits to the countries on Wednesday. The prime minister said the mutual assurances would mean the three nations supporting each other in the event of an attack, including through military assistance.

‘The question now is what we can expect to see from Russia,’ Mr Wilkinson said. ‘I expect there will be lots of movement in the province of Kalingrad and some real bolstering of troops there.

‘There is also Murmansk, not far from the Finish border, where there is also likely to be a military build-up.

‘Finland’s membership will change Nato physically by doubling the alliance’s border from 754 miles to 1,584 miles and with Sweden likely to join it will also change the strategic front.

‘If I were sitting in Moscow it would make me feel even more isolated with the Nato border right up against Russia’s western flank. This is one of the huge unintended effects of the invasion that I doubt Putin foresaw and I think it will make him extremely worried.’

A pattern of cyber-attacks, troop movements and black ops broadly known as grey zone, sub-threshold or shadow warfare methods are now likely to follow, Mr Wilkinson told Metro.co.uk. Such tools were identified in the run-up to the invasion of Ukraine, which began on February 24.

‘I would expect to see Russia use the kind of activities it has deployed in Ukraine since 2014,’ Mr Wilkinson said.

‘This includes cyber-attacks, mis and dis information and troop movements, with exercises close to the border and a build-up in Kalingrad and the north. I’m sure there will be some kind of economic effects too.

‘The response is likely to include all of the sub-threshold tools, the softer weapons, to try and disrupt Nato, but I don’t think Putin has that many cards left to play.’

In a joint statement today, Finland’s president, Sauli Niinistö, and prime minister, Sanna Marin, said: ‘Now that the moment of decision-making is near, we state our equal views, also for information to the parliamentary groups and parties.

‘Finland must apply for Nato membership without delay.

‘We hope that the national steps still needed to make this decision will be taken rapidly within the next few days.’

Helsinki is expected to formally announce its decision on Sunday, after it has been considered at parliament, and Sweden is expected to make a similar declaration on the same day.

A further Russian response issued today, in the form of a statement, warned: ‘Finland’s accession to Nato will cause serious damage to bilateral Russian-Finnish relations and the maintaining of stability and security in the Northern European region.

‘Russia will be forced to take retaliatory steps, both of a military-technical and other nature, in order to neutralise the threats to its national security that arise from this.’

Finland, which shares an 830-mile border with Russia, declared independence from Moscow in 1917 after more than 100 years of occupation. Sweden, which has not fought a war in 200 years, does not have a frontier with Putin’s nation but views its security interests as intrinsically linked to those of its Nordic ally.