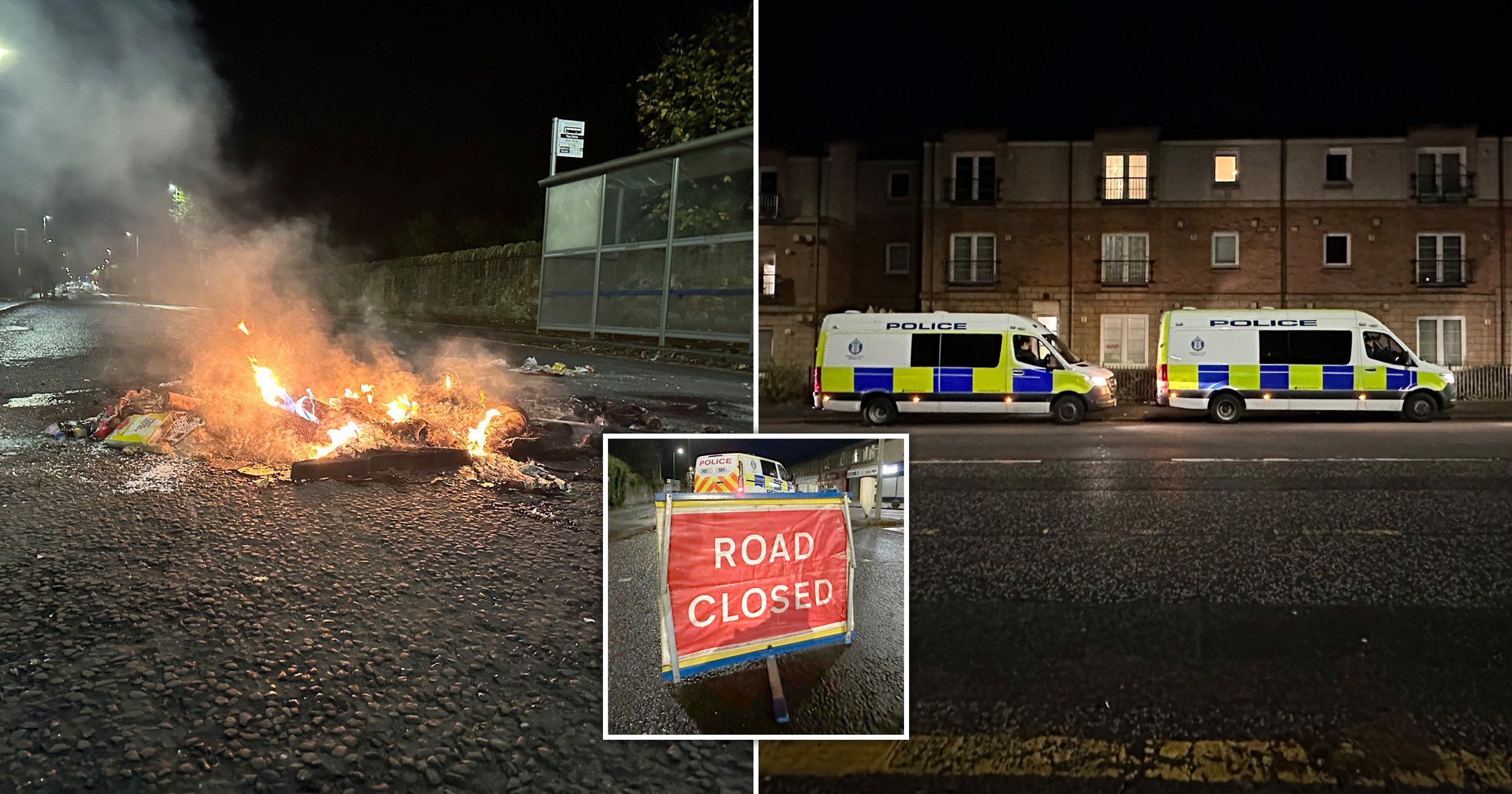 There were scenes of chaos on parts of the UK last night, with fireworks thrown at police and a road blocked by fire.

In Edinburgh and Leeds, police were targeted with some areas described as ‘like a warzone’.

People were urged to stay indoors in the Niddrie area of Edinburgh last night, where a road was blockaded with fire.

Footage shared online showed a motorbike gang racing through the streets with fireworks being launched along the ground, seemingly aimed at people and vehicles.

Niddrie Mains Road was closed to traffic, where earlier in the night a fire had been lit to block the road to passing vehicles.

A police vehicle had also been struck with a Molotov cocktail, officers said, but nobody had been injured.

In Leeds, riot police were filmed being attacked with fireworks while people uploaded footage of fireworks exploding in the road outside their homes.

‘They’re firing them down the road. Literally you can’t drive past can you?’ a man said in one clip.

Another person said: ‘It’s a f*cking warzone outside our house.’

In Merseyside, eight people were detained after ‘anti-social behaviour and criminal damage’ in Toxteth.

Police said that around 8pm reports began of youths close to the roundabout by Princes Park ‘throwing lit fireworks towards cars, setting fire to wheely bins, and causing obstructions in the road’.

Damage was caused to police cars and a bus, and an officer sustained a slight injury.

Chief Inspector Duncan Swan said: ‘This reckless behaviour caused a great deal of distress to road users in the area, and resulted in damage to bins and vehicles, and an injury to one of our officers.

‘Such dangerous behaviour can cause danger and risk injuries, and we’ll investigate thoroughly to ensure all of those we can identify and brought to account.’

The force spokesman added: ‘A police vehicle has also been struck with a bottle containing a flammable substance – however, no damage was sustained and no injuries were reported.

‘A robust police presence will be in place to address the ongoing issues and keep the public safe.

‘Residents within Niddrie are asked to remain indoors and not hinder the ongoing emergency service response.’

And a spokesman for the Scottish Ambulance Service said: ‘Please avoid the Niddrie area of Edinburgh and locals please stay inside your properties.’