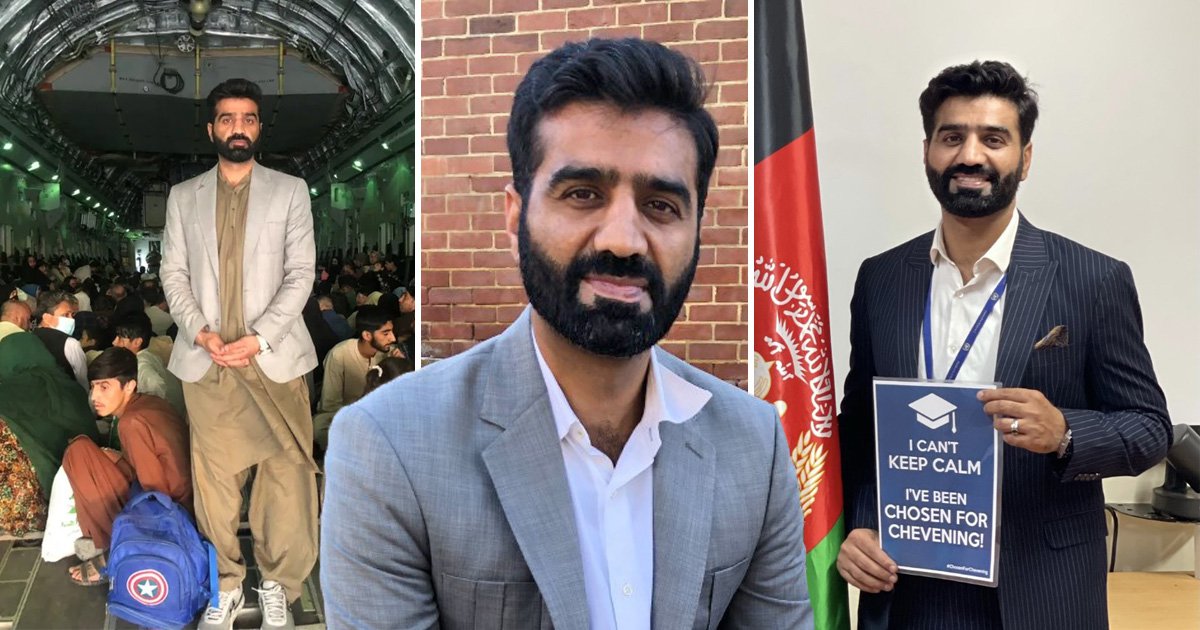 An Afghan scholar evacuated from Kabul thanked the UK for showing him ‘great love’ as he attended his first day at a British university.

Naimat Zafary, who feared for his life after the Taliban seized power, is one of nine students from Afghanistan enrolling at the University of Sussex on the UK Government’s Chevening programme.

The father-of-four was airlifted out amid fraught and desperate scenes on August 23 having spent 10 days in hiding in Kabul, his home city, after it fell into the hands of the militants.

British soldiers had to pull his group out of a pool of dirty water as they tried to make their way through vast crowds at the airport in the final days of the mass evacuation.

The university graduate had previously been working as a United Nations project coordinator and had applied for the scholarship – which enables emerging leaders from all over the world to pursue a master’s degree in the UK – for four years running before being accepted.

He feared being targeted by the country’s new rulers due to his work with the UN and his high-profile association with the Chevening Scholarship.

Naimat’s hopes and those of his peers were initially dashed when the British Embassy in Kabul stated before the Afghan government fell that it was unable to process the students’ visas in time for their scholarships this year.

The fluent English speaker acted as a media spokesperson for the group and they were granted permission to travel to the UK after Boris Johnson intervened to issue fast-track visas.

Naimat, who attended an induction at the university today, is currently living temporarily in London with his wife, Saima, and daughters aged three, nine and seven and his 18-month-old son.

Speaking of his homeland, he said: ‘It was a shocking situation.

‘I had a dream to study in the UK and return to improve my country, but the ministries are no longer there.

‘Instead there are barbaric people in power who do not know the value of education. You cannot enter into dialogue with them.

‘Those 10 days were the most stressful time in my own whole life.

‘I couldn’t go out of the house for fear that the Taliban would kill me.

‘I only went out once or twice and when I went to the market I could see the fear in people’s eyes, there was no joy left in Kabul.’

On August 22, Naimat and his family went to Kabul airport with just a handful of belongings but they were unable to make their way through a crowd of around 15,000 people.

The next day, as the scenes grew increasingly desperate, he and around 36 fellow Cheveners and their dependents formed a circle with men and young people holding hands on the outside and women, children and the elderly in the middle. British soldiers pulled them out of a pool of filthy water which two days later would be the scene of carnage after a suicide attack.

‘We formed a human chain because it was the only way to protect the women, children and elderly from the force of the crowds,’ he said.

‘In total it took us three hours to reach the point where the British soldiers were. We crossed the pool of dirty water and they stretched out their hands and pulled us out. It was 10 hours after we first arrived at the airport.’

The scholar is now enrolled on a one-year postgraduate course in Governance, Development and Public Policy at the Institute of Development Studies, which is affiliated with the university and based on its campus in Falmer, East Sussex.

His future is uncertain but he remains a passionate champion of education and development in Afghanistan, and is considering supporting his homeland through research and writing in the UK after his course ends.

‘What has happened in Afghanistan is a tragedy,’ he said.

‘I was reading a report last week that said by 2022 there will be 97 per cent poverty in the country.

‘I believe the international community should support the people of Afghanistan, they require humanitarian assistance and education.

‘Even if you stop education for one or two years you are wrecking the dreams of boys and girls who wanted to go on to higher education.’

Naimat travelled to Sussex, which is one of 15 UK Universities of Sanctuary, ahead of his family’s scheduled relocation in around two weeks’ time.

‘I have found a calm and peace in the UK with happy, smiling faces that welcome you, which has touched my heart,’ he told Metro.co.uk

‘It’s fantastic. I can go to the park with my family and enjoy being in a very peaceful environment. I can see a very good future for my children here.

‘I feel I have had great love from the UK on my journey, including from the soldiers who reached out and pulled me out of the pool. I’ve had such a warm welcome and feel I am home.’

Naimat is among a dozen new and returning students from Afghanistan arriving at the university this week.

Nine of these are on the Chevening programme, with some of the group studying at the Institute of Development Studies. Three more are currently overseas and hoping to make their way to the campus soon.

The university is running an appeal to support the students as they rebuild their lives in the UK.

For more about the Sussex Fund Afghan Appeal, click here.