People have been welcomed into Westminster Hall to say final farewells to the Queen’s coffin.

Hardy royalists have queued in the capital for nearly two days, despite rain and wind overnight.

Vanessa Nathakumaran, 56, was first through the doors of Westminster Hall this evening.

She had started to queue on Monday at Lambeth Bridge.

‘I really really want to be part of it’, she had told reporters. ‘I don’t want to miss it in case… they said they are probably going to control the crowds if [the queue] gets too long.’

A woman in a Welsh rugby top and large hat was second through the doors of Westminster Hall.

Many of those paying respects this evening could be seen wiping away tears as they passed the coffin.

Others fell to their knees as they bowed heads toward the casket. 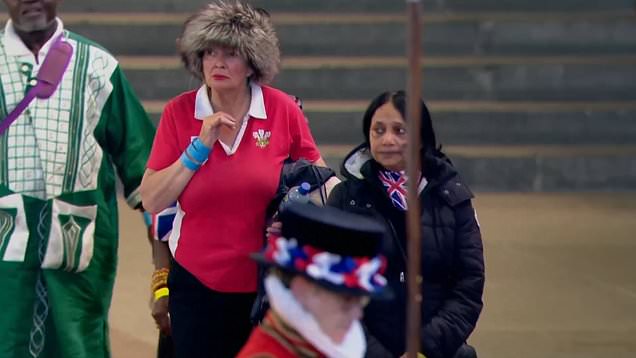 Westminster Hall will be open for four days to allow the public to view the Queen’s closed coffin until her state funeral on Monday.

Anticipating the dizzying queues, security staff have been placed around Parliament, Victoria Tower Gardens, Lambeth Bridge and along the Covid Memorial Wall.

But security officials anticipate the lines will even spill all the way to Tower Bridge.

Doors opened at 5pm tonight, and the Department for Digital, Culture, Media and Sport is running a live queue tracker to pinpoint the end of the line.

At 5.20pm, the tracker showed the queue was around 2.9 miles long, stretching as far as London Bridge.

Inside Victoria Tower Gardens, portable toilets and crowd control infrastructure has been added.

No 10 has advised commuters to ‘change their working patterns accordingly’ as London will be ‘extremely busy’ in the coming days.