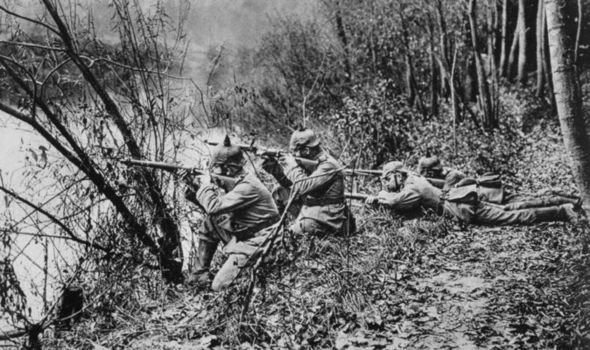 For more than a century, the German troops have lain undisturbed where they perished over six agonising days after the 1,000ft Winterberg supply tunnel was blocked at both ends by pinpoint-accurate French artillery fire on May 4, 1917. Thousands of tonnes of earth sealed the exits, leaving no chance of escape for troops of the 111th Reserve Infantry Regiment from Baden. Now a former French mayor and his ex-legionnaire son who located the hidden tunnel and controversially uncovered an entrance want a full excavation, so the remains of the men who perished on the Chemin des Dames battlefront near Reims, in the Champagne region of France, can be given a proper burial.

Alain Malinowski and his son Pierre argue the troops should be honoured but, in Germany, their discovery has been described as “almost unfortunate”, and many people feel they should be left where they are.

The remains of some soldiers have already been removed, with skin and hair found, which may make DNA profiling easier. It is also likely that uniforms, equipment and personal effects have remained in good condition, especially if, as believed, the tunnel has stayed airtight over the past century.

But wisely, Pierre has refused requests to show pictures of the remains and says they have been temporarily reburied while discussions continue with the French and German authorities.

The discovery has led to a fierce debate about the ethical, moral and financial dilemmas over what to do with so many Great War dead. Should the bodies be disinterred, identified and then reburied in a war cemetery?

Should there be a full-scale archaeological dig to reveal more about the conduct of the war and the men who fought it? Should a memorial or a museum be created? Or should everything be left as it is? 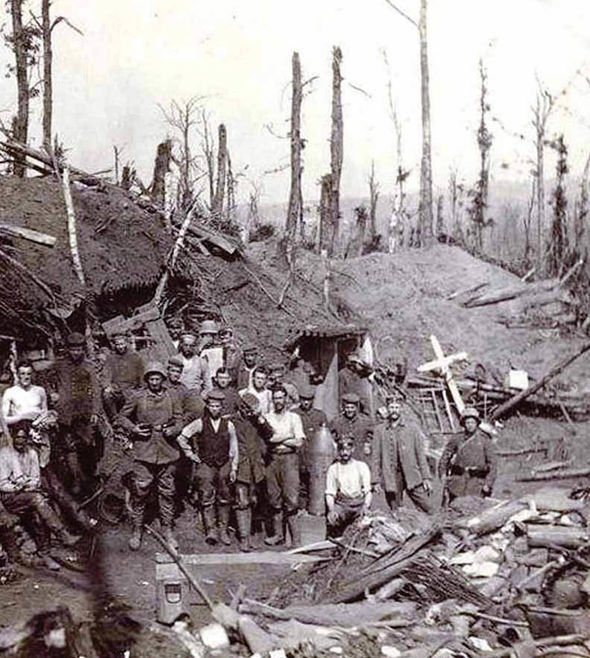 There is little doubt something must be done, even if only to protect the remains. Treasure hunters have already been digging around the site, unearthing artefacts including axes, spades and pit-props as well as unexploded shells.

British historian and author Richard van Emden, whose latest book is Missing: The Need For Closure After The Great War, explained: “It’s certainly an important find but, as is often the case, with such major discoveries there will be many opinions about what to do now.

“The German soldiers had all died together and they’ve not been disturbed for nearly 105 years. I can certainly see the argument that they should rest in peace where they all died together, but they could also be buried in a German cemetery. Decisions will have to be made about where that would be.”

If surviving relatives were traced in Germany, they might have their own views on what to do with the bodies.

“What is certain is that there will be a large cost involved if the remains are moved,” says Richard, who has written 21 books on the First World War and interviewed many veterans in person.

“DNA testing is very expensive and that takes time. Many personal items may well be intact, so people will be able to learn more about the war from the German perspective but I can see how some people will be uncomfortable with retrieving the soldiers’ possessions. It is an extremely difficult issue.” 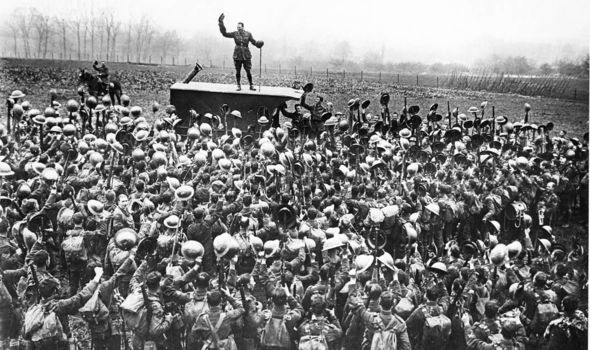 One option would be for a German cemetery to be built near Reims for those who can be recovered. The British Commonwealth War Graves Commission faced a similar dilemma when mass graves were discovered on the edge of Pheasant Wood, outside the village of Fromelles in Northern France.

Ultimately, however, the Fromelles (Pheasant Wood) Military Cemetery was built in 2010 for the graves of 250 British and Australian soldiers killed during the Battle of Fromelles on July 19, 1916, during the Somme offensive. More than 2,000 Australian and British soldiers were killed in the battle.

The Winterberg tunnel was created during two years when German forces held high ground along the Chem des Dames front, allowing time to build a sophisticated complex of underground defences near the village of Craonne. It ran from the north side of the hillside crest, out of sight of opposing French forces, to supply soldiers in trenches on the south-facing slope.

It provided natural shelter for German troops until French shells scored direct hits on the entrances during the second Battle of Aisne, setting off underground ammunition stores and filling the air with toxic fumes.

Alain Malinowski, who grew up nearby, developed an interest in the story which he admits became something of an obsession. During time-off from working for the Paris Metro in the 1990s, he searched French military archives held at Chateau de Vincennes. 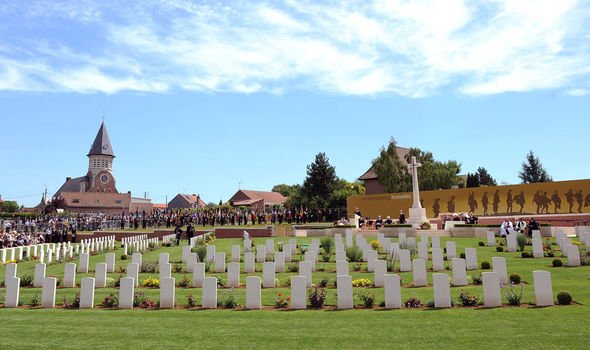 Over 15 years, he examined the landscape, read witness statements and survivor accounts but could not establish exactly where the entrances were because of dense undergrowth. Then in 2009 he came across a map that showed the tunnel. “I felt it, I knew I was near,” he told the French newspaper Le Monde.

“I knew the tunnel was somewhere beneath my feet.” He informed the authorities of his find but, for a decade, nothing happened, either because they did not believe him or because they had no desire to open a mass war-grave.

Finally his son Pierre, 34, took matters into his own hands, literally, and started digging at the site despite such actions being illegal. In January last year, a mechanical digger scraped down about 13 feet, uncovering machine guns, bayonets, rifles, gas mask canisters and unexploded munitions. Human remains were also found.

One member of the team said: “It was like Pompeii. Nothing has moved.”

Only three men survived long enough to be dug out before the crest was abandoned to the French. One, Karl Fisser, left an account for the regimental history, recalling: “Everyone is calling for water, but it was in vain.

“Death laughed at his harvest and Death stood guard on the barricade, so nobody could escape. One comrade lay on the ground next to me and croaked with a breaking voice for someone to load his pistol for him.”

It is likely many men, expecting their bodies to be recovered, wrote notes to loved ones.

But so far the German War Graves Commission has shown little interest in the discovery. Spokesperson Diane Tempel-Barnett told a radio station: “To be honest we are not very excited about the discovery. In fact we find it almost unfortunate”.

So far nine soldiers from the 111th Regiment have been identified. It is known men were recruited from the Baden area of the Swabian Alps.

Genealogist and First World War expert Mark Beirnaert said: “What would be fitting is that they leave this cold eerie tomb and be buried together as comrades.”

But Pierre Malinowski argues forcefully: “These were farmers, hairdressers, bank clerks who came willingly to fight this war and then died in a way that we cannot begin to comprehend.

“The bodies will be preserved with skin, hair and uniforms. Remember the tunnel was where these soldiers lived from day to day so there will be all their normal possessions.

“Every soldier will have a story. It will be the biggest ever reserve of human material from the First World War.” 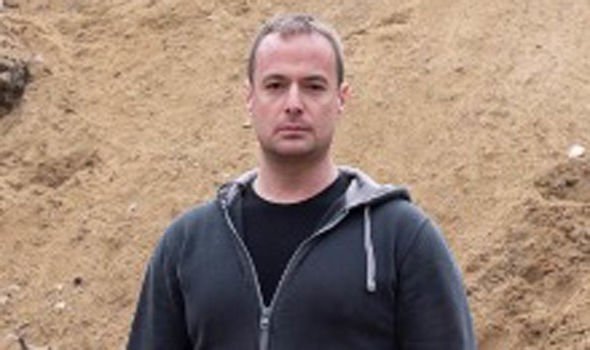 Some of the items have been described as a “treasure trove”, but it is not clear who will keep the “treasure” if soldiers can’t be identified. There is a brisk trade among collectors in artefacts from both world wars including rifles, uniforms, bayonets and bullets.

Pierre Malinowski, who served six months with the Foreign Legion before joining the regular French army, is keeping quiet about his next steps. He is unpopular in some sections because he once worked for Jean-Marie Le Pen, one-time leader of France’s National Front. He was also a member of the European Parliament but has now reinvented himself as a Moscow-based war historian and is said to be close to Vladimir Putin.

He previously found financing for projects to uncover the remains of Russian soldiers who died near Reims during the First World War. Next month he will launch a major project to “pay tribute” to the sacrifices made by Red Army soldiers during the 1941 German invasion.

But it is the discovery of German remains in the Winterberg tunnel that is currently the focus of so much debate. A century since their terrible entombment, it remains to be seen whether officials will continue to bury their heads in the sand.