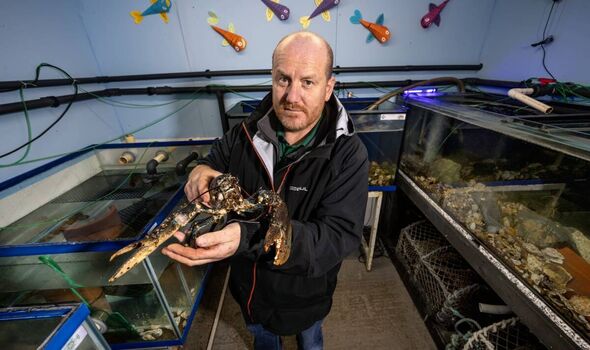 Gary Humm, 47, is determined to make the Essex coastal town of Brightlingsea once again a hub of lobster fishing. He intends to put around 5,000 a month into the waters in 2023.

He hopes they will breed and once again provide a source of livelihood for people on this stretch of the English coast.

The father of four founded the Thames Estuary Lobster Hatchery and his wife, Marie, runs an education programme for local schoolchildren.

The local lobster population, he says, was devastated when the “Beast from the East” hit in 2018.

“A lot of our lobster stocks got washed up on the shore because of the really severe winds that we had and they all froze,” he said. “We really noticed a huge drop in numbers.”

Restoring the population is a long-term project, with it taking around five years before a lobster is ready to be harvested.

Lobster larvae grow in “aqua hives” at the hatchery and are released into the sea when they are about the size of a thumb.

Saving the local lobster population is now a personal mission.

“The numbers are so low that something has to happen, otherwise they will be gone,” he said.

He appreciates the irony that someone with a lifelong passoin of fishing now spends so much time putting creatures back into the sea.

A further goal is replenishing native oyster stocks around Brightlingsea by building floating cages. He says the population was devastated by an extreme cold snap in the 1960s.

“It was literally the Big Freeze that killed it off in 1963. The beds were full but the whole lot just collapsed.”

Like many small businesses, one of the biggest challenges facing his enterprise is the increase in energy costs.

He says he has been hit with a 400 percent hike in electricity costs since he started the lobster release programme.

He fears that if costs escalate again the education programme could be “scuppered”.

Visitors to the centre get to touch full-size lobsters and also learn about different types of fish in the small aquarium.

Mr Humm’s big dream is that some of the children go on to make living in the estuary.

He said: “If it works out and one or two of the children that come through the education centre go on to be ‘fisherpeople’ then I’ve succeeded.”