Metropolitan Police said 14 ­people were given penalties. Seafood hauliers descended on roads near 10 Downing Street yesterday after saying they were being “tied in knots with paperwork” caused by the new deal. Exports of fresh fish and seafood have been severely disrupted by delays since the UK’s transition period ended on December 31.

Lorries carrying freshly caught produce have been held up at distribution hubs and many have struggled to enter France.

Police said: “London remains in Tier 4 for Covid ­restrictions and anyone breaching the regulation will be reported.

“No arrests occurred, but a number of lorries have been stopped and 14 people, who were either drivers or passengers in those vehicles, have been reported via fixed penalty notices for Covid-related offences.”

Prime Minister Boris Johnson promised compensation for the fishing industry as a result of “teething problems” with his Brexit deal. 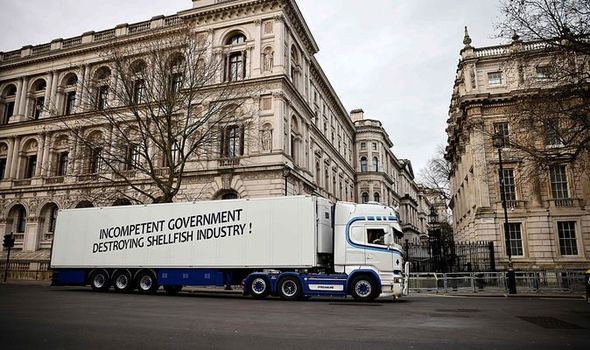 He said: “When it’s not people’s fault, of course we’re going to compensate and help out. Funds have been put in place to do that.”

Mr Johnson said he sympathised with exporters but said part of the problem was a collapse in demand as the pandemic closed restaurants.

Some Scottish fishermen are now landing their catch in Denmark to avoid the new bureaucracy.

A spokesman for DR Collin & Son, in Eyemouth, Berwickshire, which took part in the protest, said companies have put in the time and training in order to be ready.

He added: “But the technology is ­outdated and cannot cope with the demands being placed on it – which in turn is resulting in no produce being able to leave the UK. 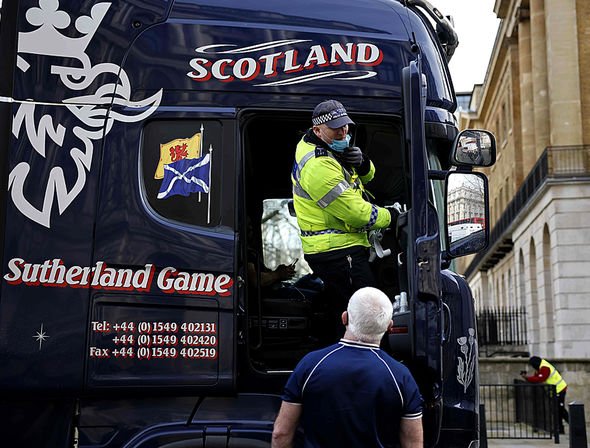 “These are not teething issues and the consequences of these problems will be catastrophic on the lives of fishermen, fishing towns and the shellfish industry as a whole.”

Alasdair Hughson, Scottish Creel Fishermen’s Federation chairman, said: “If this debacle does not improve very soon we are looking at many established businesses coming to the end of the line.”

Labour leader Sir Keir Starmer said: “The Government has known there would be a problem with ­fishing and particularly the sale of fish into the EU for years.

“It didn’t prepare for it and now it is trying to blame the fishing communities rather than accepting it’s their failure to prepare.”