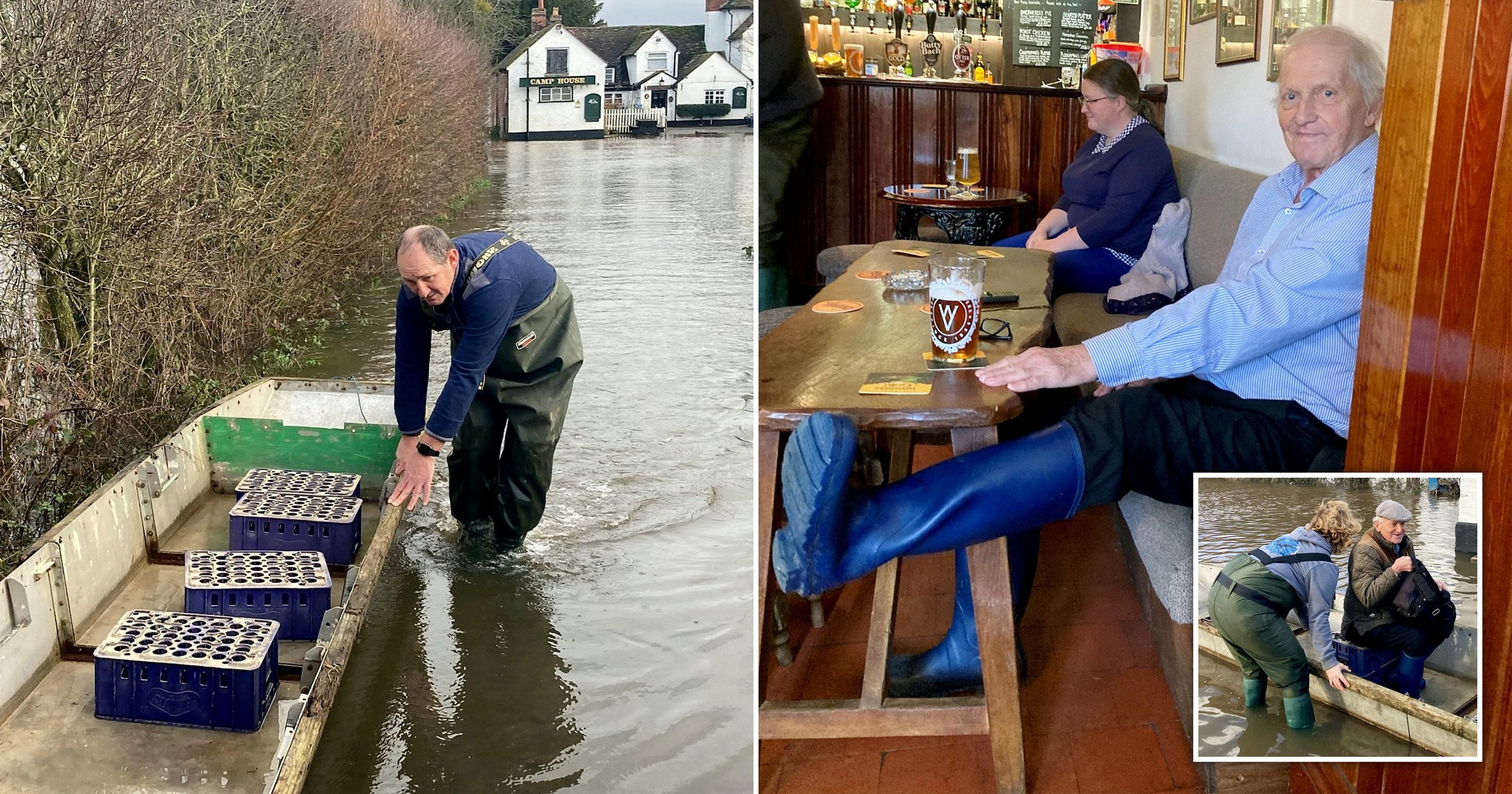 It takes a lot to keep us away from the pub – and a little flood is no exception.

Days of heavy rain have left The Camp House Inn, in the village of Grimley north of Worcester, ferrying regulars in by boat.

The recent downpour has caused the River Severn to burst its banks, leaving the pub surrounded by what bar staff are affectionately calling their ‘moat’.

Undaunted by the weather, the local watering hole has adapted its business, ensuring punters are still able to wet their whistles and not just their feet.

Sitting on beer crates, drinkers take in scenic views of the submerged car park and the nearby road while boating in serenely across three feet of water.

An adjoining tower, believed to date from the 14th century, functions as a lighthouse after darkness falls. It’s even thought to have been built using wood from old ships.

Jo Wainwright-Scarrot, assistant manager at the pub, said: ‘I’m more boatswain than barmaid at the moment.’

The Wainwright family has run The Camp House Inn since 1939, and have seen their fair share of rough weather.

Plaques above the fireplace mark the previous high water mark, from 2000, with the worst flooding thought to have taken place in 1947.

‘The waters are rising faster than normal. We bring the customers here by boat and bring them back in the boat when it’s dark.

‘Regulars say they will return to favour by mucking in with mops and marigolds after the flood waters recede.’

Roger Blackmore, 77, who cycled to The Camp House Inn before getting on the boat, said: ‘I love the atmosphere and hospitality – and the people you get inside. People here have helped me at a low ebb and have looked out for me.

‘When you know you have got the support it makes a lot of difference.’

John Snaith, 40, said: ‘I don’t think twice about putting my waders on before marching over for a pint.

‘There’s a bit of a blitz spritz when it floods and everyone just pitches in to help.’

Weather warnings remain in place across parts of the UK with further flooding and strong winds expected.

The Environment Agency has issued 89 flood alerts for areas across England.

Natural Resources Wales has issued 17, with a further five from the Scottish Environment Protection Agency.

The Met Office has said the rain is likely to continue through the weekend.