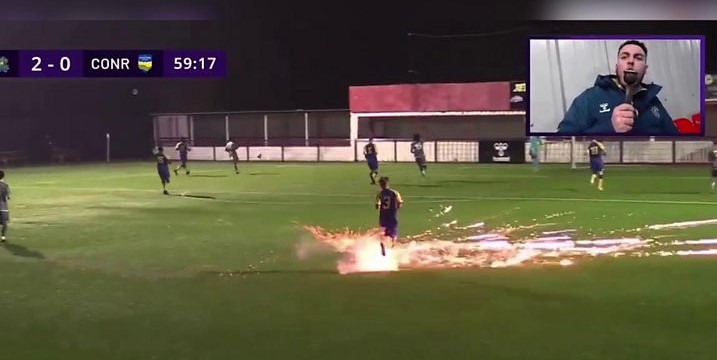 A shocking video showed a footballer falling to the ground after being hit by a firework during a match.

The incident occurred as Hashtag United’s reserve team took on Concord Rangers reserves on Friday at the Len Salmon Stadium in Basildon.

The club’s founder Spencer Owen said the explosion could have ‘blinded’ one of the players.

‘Yet another reason to add to the list of reasons to sack off fireworks,” he tweeted after the game.

‘A few inches different and our lad could have been blinded. Not the only football game something like this happened at last night either.’

We expect fireworks whenever @hashtagutd play but not like this!

Our player, Matas Skrna, is luckily ok but this could have been bad!

Game abandoned at 2-0 up as house where fireworks came from refused to stop. Two more landed near pitch. Police have been notified. Stay safe. pic.twitter.com/YP22OaLDb6

A Hashtag spokesperson said a volunteer had gone to a nearby house and asked if they could halt their fireworks.

They said the household carried on with their display which led to the match being abandoned, after which the fireworks stopped.

‘Our player, Matas Skrna, is luckily ok but this could have been bad!’

Hashtag added police had been notified.

Hashtag United is a football and esports club in Essex which was formed in 2016 by presenter and social media personality Mr Owen.