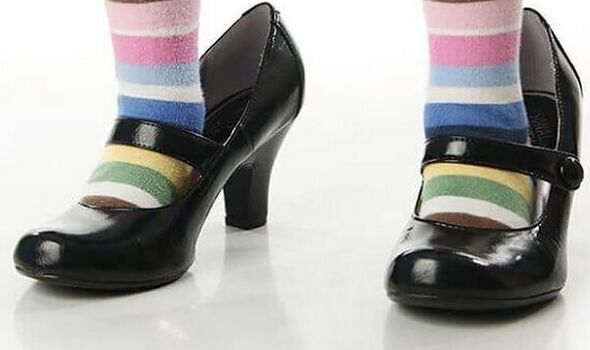 Shoe guides for boys and girls have been slammed by campaigners as “offensive gender stereotyping”.

Footwear firm Shoe Zone has come under fire for the way it has depicted guides for parents when buying shoes for male or female children on its website.

Under a “Boys’ Shoes Fitting Guide” shows a picture of three young boys playing outside and underneath writes: “Playing football, climbing trees and getting up to mischief are typical activities for a little boy that’s just found his feet – so, it’s important he has the right pair of shoes for his adventures.”

In the section for girls, alongside photo of a girl’s feet in high heels, the website reads: “When your little girl is growing up, buying footwear can prove to be quite difficult. Measuring for footwear can be an arduous task and choosing the right shoe with the correct fit can seem like a mine field.

Campaigners have now criticised the retailer over its size guide featured on its website. Let Clothes Be Clothes, a campaign to end gender stereotyping in the design and marketing of childrenswear, highlighted the issue on social media, describing it as ‘completely unnecessary’.

“You can be torn between letting them express their inner fashionista, or being the voice of reason and sensibility. Whichever you choose, comfort and fit should always be at the forefront of any footwear choices made and there are a few key things to take into consideration:

Francesca Cambridge Mallen PHD(c), of Let Clothes Be Clothes, has made a formal complaint about the issue to the Advertising Standards Authority (ASA).

She told the Manchester Evening News: “As a mum, guess what – I want my shoes, and my kids’ shoes, to do more than just look a certain way.

“I want comfort, practical shoes and I find the teen girls as fashionistas appearance obsessed stereotype both deeply offensive and indicative of harmful, and regressive stereotyping aimed at children and young people.

“I would therefore like the ASA to investigate this as a formal complaint against Shoe Zone on the basis that such advertising of their products – based on style and type of shoe, not just as a sizing guide – represents both harmful and offensive gender stereotyping.”

Dozens of people responded to her tweet about the issue, sharing her dismay.

“This might be the most overt stereotyping I’ve seen with shoes,” said one. “This is ridiculously old-fashioned and sexist advertising,” said another.

A third added: “This is awful – girls play football, climb trees and get up to mischief too!! Why are boys seen to be adventuring but girls being “fashionable?” makes me sick.”

The Manchester Evening News reported that Shoe Zone had not responded to a request for comment.

A spokesperson for the ASA confirmed a complaint has been received, adding: “We’re currently assessing this complaint to determine whether there are grounds for investigation.”

New Omicron cases double in one day as UK records another 3,201 infections