MILAN — When the pandemic first hit Italy and masks became scarce, Myss Keta, the mysterious Queen of the Milan Night, came to the rescue. The Italian rapper, performance artist and L.G.B.T.Q. icon had amassed a vast collection of face coverings that she wore for years to hide her identity. So she began distributing them to her friends in need.

“I had so many,” she said. “Surgical, cloth, vinyl, silk, whatever material.”

This month, with a second wave of the coronavirus rising and Italy requiring the wearing of masks in public at all times, grandparents, politicians, middle-management businesspeople, doctors, lawyers, delivery people — just about everyone — is covering up. That has rendered Myss Keta — whose use of masks took her from underground clubs to the cusp of national, if incognito, celebrity — an improbable authority on life behind the surgical veil.

It has also threatened to strip her of her defining shtick.

“Before, it was a distinguishing characteristic. Now, it’s something we all have in common,” she said as she lifted a black surgical mask — the casual black T-shirt of her vast collection — to sip a Bloody Mary at Bar Basso in her Porta Venezia stomping grounds of Milan. Under her trademark blond bangs, her eyes remained covered as usual in dark Givenchy sunglasses.

It used to be only the front-row fans at her concerts who emulated her by wearing masks. “Now, everyone seems like a Myss fan,” she said.

The Myss behind the mask remains a mystery. Gentle inquiries into her true identity yield only blatantly fictitious biographical details that she called “Myssketiana mythology.”

“I’m always Myss Keta. I’m always myself, 100 percent,” said Keta, who later froze in her full-length faux leather trench coat when a friend accidentally let a first name slip. “Myss Keta is the diva of Porta Venezia. I’ll say it until they name parks after me.”

Myss Keta, a woman of uncertain age, is a John Waters dream of an Italian rap star. She first appeared in 2013, like a voluptuous Venus from a clubbing clamshell, with the release of the song “Milano, Sushi & Coca.” 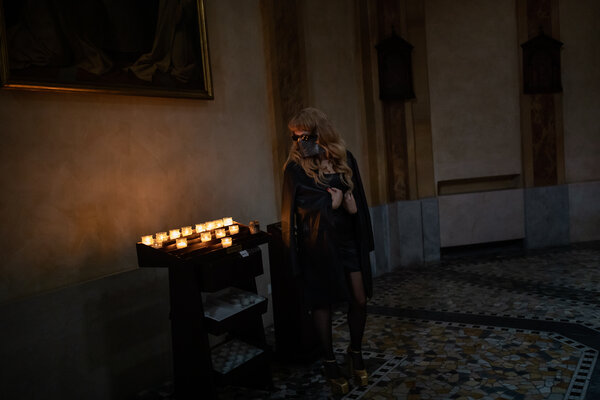 The debut, rapped in her hypersexualized, cartoonishly sultry and gleefully trashy style, simultaneously venerated and mocked Milan’s nightlife. She and her arts collective, Motel Forlanini, decided that she should appear anonymous in the video to better become “the voice of a certain period, of a certain Milan scene,” she said. (Her body, or parts of it, was nonetheless prominently featured.)

The mask she wore at her first concert intrigued more people, and the crew decided that she should stick with the disguise. For nearly a decade, she has hidden her face with every mask imaginable — sequined, metallic, feathered. She has worn a digital clock over her eyes, a Yosemite Sam beard over her jowls.

In recent years, she has sought to branch out from her dance club roots to something approaching mainstream success. She sold out concerts, brought her campy, languorous rap verses to Germany, became a featured guest on Italian national radio and television shows and appeared on the cover of a national magazine for an article about Milan nightlife. She signed with Universal and discussed her book and identity and women’s empowerment with the director of Turin’s book fair, Italy’s largest. Last year, she collaborated with some of the country’s most recognizable pop singers and rappers.

She said she felt carried on the crest of popularity leading to a breakout year.

Instead, she ran mask first into a lockdown.

“It put the brakes on the Myss project,” she said.

In September, she released her first pandemic-era song and video, in which she dances wildly alone in an open field with a mask on. (“The most diligent of all,” she said.) But with masks omnipresent, she and her collaborators have began to contemplate “a new trick, another way of keeping anonymity,” she said. She considered a motorcycle helmet, extreme makeup and “prosthetic modifications” as possibilities. The mask mandate, she said, “accelerated” the move forward.

But while she researches a new look, she remains one of Italy’s leading authorities on incessant mask wearing.

Pragmatically speaking, she said, surgical masks are best for talking. For performing, the singer of “Burqa di Gucci” prefers a “mèches burka.” She has learned that the mask can shift power balances to the wearer. She noticed that her fans who donned masks also felt freer and more themselves.

Dressing up for a wild night out, though, is different from breathing behind a particulate-filtering face piece for the foreseeable future. At least, she said, the early negative connotation of the mask — linked to sickness, hospitalization and hypochondriac anxiety — has transitioned to respect for others and a possible font of expression, bursting with colors, fabrics and name-brand cachet. She said she herself had pulled Myss Keta brand masks at the outset of the epidemic to avoid exploiting the tragedy.

But as someone who hardly removed her mask outside her apartment for seven years, she also commiserated with an Italian populace entering a stuffy new reality.

The pandemic has also taken its toll on other prominent masked Italians. Only days before Italy began locking down towns, the popular Neapolitan artist Liberato, who for three years has hidden his identity, released a video for his song “We Come From Napoli.” In the video, Liberato and his masked friends are intended to look menacing as they stalk the Port of Naples playing cards, tagging walls and eating pork. But in the pandemic, it looks like any given Tuesday.

“Today, it’s strange to see those images,” said Francesco Lettieri, a close associate of Liberato’s who directed the video. “Because that’s all become very normal.”

Others see more of an upside.

Valerio Massimo Visintin, the restaurant critic for Italy’s largest newspaper, Il Corriere Della Sera, said he was sometimes jokingly referred to as “Myss Keta’s uncle,” because he has sought to preserve his anonymity for the last decade by dressing as “the man in black” during public appearances.

As he sat on a couch in his Milan agent’s office dressed like a cross between Darkman and an Irish Republican Army militant, he recommended that novice mask wearers practice increasing the volume, pausing between sentences and gesticulating more. In addition to a Donnie Brasco leather jacket and a black Stetson, he wore black gloves cut at the fingers, because his wife said that women recognized men’s hands.

He said that he had tried a Zorro mask but that it was too revealing, and said he couldn’t breathe through a Venetian carnival guise. He settled on a ski mask usually worn under a motorcycle helmet. He hasn’t taken a photo, not even a family one, in years and he said he uses taxis “like Superman did phone booths.”

His years of practice, he said, have made it easier for him to wear his FFP2 medical mask, which he donned under his disguise. It offers him “double protection,” he said, both in terms of health and of staying anonymous. “Now, the most they would recognize is a mask.”

Myss Keta also said that the widespread mask wearing provided her with anonymity on streets where she used to be constantly accosted. This was especially the case in the summer, when so many others joined her in wearing sunglasses atop their masks. “It was everybody’s look,” she said.

After signing an autograph, she got up and walked past a sexagenarian using his blue mask as a pocket kerchief as he drank a spring break-sized Negroni Sbagliato cocktail. She gave a tour of the neighborhood, offering observations peppered with her Milanese slang (good things were “top” or “total”; the best things were “morta,” or dead) and got noticed among the masked masses.

Teenagers looked at one another with shell shock. A table of Germans shouted out, “We love you, Myss Keta!”

For now, the mask has its appeal and she intends to keep wearing it.