Home » Europe » For Italy’s Populists, Everything is a Nationalist Cause. Even Leonardo.

Rome — In a small showroom filled with replicas of Leonardo da Vinci masterpieces, Lucia Borgonzoni, Italy’s under secretary for culture and a member of the right-wing League party, attested to the authenticity of her disgust with the French.

She accused France of trying to culturally appropriate Leonardo for a 2019 exhibition at the Louvre celebrating the 500th anniversary of his death. And that was just the beginning.

France had treated Italy with “a lack of respect” and like a cultural “supermarket” by “sending a shopping list” of the works it wanted to borrow — essentially everything.

“Probably no other country would dare” to behave as France had, she said, warming to the topic as she faced a fake Mona Lisa in the Leonardo da Vinci Experience museum near the Vatican. She perused reproductions of Vitruvian Man and the Annunciation. “Let’s give them these,” she said with a laugh.

Not much has been off limits as Ms. Borgonzoni’s hard-right League party pushes its ‘‘Italians First’’ agenda. Italian women are encouraged to have more babies. Migrants are shown the door. Matteo Salvini, the party leader, fills his social media feeds with posts about Italian pasta and wine.

Nationalism — taboo for half a century following World War II and the fall of Mussolini — is suddenly in, as every possible political dispute is cast in chauvinist hues. Culture had long been a relatively neutral terrain. Not anymore. And deliberately so.

“Being from the League, it’s our way of seeing the country, the society and the world,” Ms. Borgonzoni said of the party’s Italians First playbook. 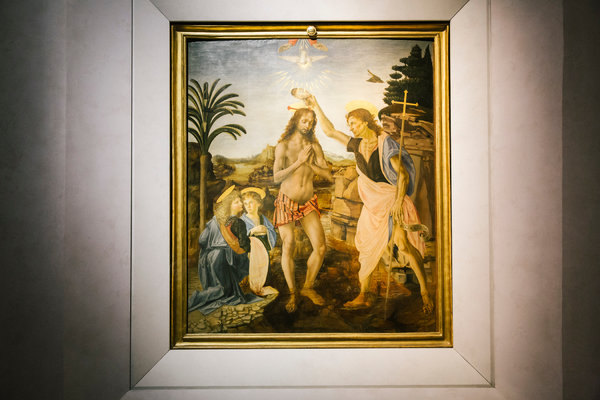 When it comes to Leonardo, the result is either an inelegant and amateurish faux pas, as her critics contend, or a political masterstroke ahead of European Parliament elections in May. Either way, Ms. Borgonzoni has helped her party escalate tensions with France at a moment when Europe is already undergoing a dramatic political realignment.

Along with the bureaucrats in Brussels, the pro-European French president, Emmanuel Macron, has been the target par excellence of an Italian populist government that has repeatedly picked, and won, political fights on everything from migration to trade.

“Surely our states are having a moment, not only in culture, of friction,” said Ms. Borgonzoni, the granddaughter of an Italian painter who worked briefly as an artist and interior designer. “Surely the fact that Europe is going to vote next year has raised the tension” on a range of issues including, now, Leonardo.

Born in 1452 outside Vinci, centuries before the creation of the Italian state, Leonardo grew up in Florence, lived in Milan and stopped off in Rome before moving to France, where he died and was buried. King Francis I of France acquired the Mona Lisa from one of his heirs and it hangs in the Louvre, which has more Leonardo paintings than any other museum.

In exchange for the ‘‘shopping list’’ of works it wanted from Italy, Ms. Borgonzoni said, the Louvre failed to make concrete offers for a Rome exhibit in 2020 commemorating the 500th anniversary of the death of Raphael.

Ms. Borgonzoni said she did not consult with Mr. Salvini, of whom she is a trusted ally, before going on the offensive, though he subsequently told her to “go forward.”

The French have responded with furious headlines (“Franco-Italian Tension Around Leonardo da Vinci” read Le Monde) and warnings that Italy risked alienating French business and tourism and isolating itself from traditional European partners.

For a while, things seemed to be coming together for the French.

An expectation of reciprocity by the Italians had contributed to the Louvre’s loan of two Leonardo masterpieces to a show in Milan in 2015, according to people with knowledge of the negotiations.

A spirit of cooperation developed between the French and the previous center-left government, and the French continued to believe that Italy’s museums would loan significant Leonardo works for the Paris retrospective.

In another sign of good will, the Louvre pushed back the date of its exhibit to October 2019 to give Italian museums space for their own Leonardo exhibits in the spring.

On Jan. 27, 2017, an administrator of the Scuderie del Quirinale museum in Rome wrote to the Italian government’s museum liaison, suggesting that Italy did not have the time, and Rome did not have the necessary historical connection to Leonardo, to put on a major anniversary show in 2019.

Instead, the previous government suggested that they press for a major Raphael exhibit at the Scuderie, with the contribution of Louvre paintings, for the following year.

A June, 2017 letter from the Culture Minister at the time, Dario Franceschini, emphasized the importance of the Raphael exhibit and Italy’s intention to “actively collaborate with” the Louvre exhibit, not compete against it.

To that end, the ministry then convened the country’s museum directors for a meeting that July, according to internal documents provided by Ms. Borgonzoni, who assumed her office after the League came to power this June.

She said the correspondence demonstrated that a lousy deal was in the works and that she needed to stop it.

But it’s not entirely clear there was a deal for Ms. Borgonzoni to scuttle.

Eike Schmidt, the director of the Uffizi museum in Florence, said that no agreement was ever in place and he had made it clear to the Louvre that his museum would not loan the three Leonardo masterpieces they had requested in 2015 because they were too fragile.

Instead, he said, the museum was evaluating a loan of Leonardo drawings, which would require approval from Italy’s culture ministry.

Mr. Schmidt said the political dimension of the procedure — with the French government contacting the Italian government rather than making a museum-to-museum request — was exceedingly rare for such loans.

“The first people playing politics were the French,” he said, suggesting the clash could have been avoided if the French had kept to the usual museum channels.

Instead, he said, a political problem is “what they got” and is “what happens when you try and make an arrangement with one government and the government changes.”

He said that Ms. Borgonzoni also expressed to him her outrage at the negotiations “and that the French were trying to cash in on” a potential agreement.

The Gallerie dell’Accademia in Venice has agreed to loan six Leonardo drawings, to which the French replied “thank you so much, what about Vitruvian Man,” said Paola Marini, the museum’s former director. So far, she said, “our curators are not in favor.”

“It’s a total Italian soap opera,” said Simone Verde, the director of the National Gallery of Parma, which decided in October to send Leonardo’s Scapigliata to the Louvre, the only major work so far going.

Mr. Verde said he explained to Ms. Borgonzoni why it was a good idea for that work to travel to this major show and she agreed. But she also pointed out, he said, that it was an astonishing error on the part of the Italians not to have organized a major Leonardo show of their own.

He says he agrees, and hopes one is still possible.

From an art history point of view, Mr. Verde said, the lack of an Italian retrospective means that Leonardo “becomes a globalized artist with no country of origin, and he belongs to the museum that has the most of his art works.”

He said he looked at the issue from an anthropological rather than political point of view, and that it showed that Italy “is a country that has no sense of itself.”

She worries that a seminal Leonardo show in Paris will eclipse Italy’s celebrations, while drawing tourists and scholars to France and contributing to the notion (which hardly anyone has) that Leonardo was French.

Some Italians worry that the Louvre could punish Italy by lending its Raphael paintings to The National Gallery in London, which is also planning a large Raphael show in 2020. Some Italian museum directors said Italy had enough Raphaels to put on its own blockbuster show anyway.

Ms. Borgonzoni laughed at the suggestion that the Louvre would stop talking to Italy or that Italy, with all its cultural riches, could become isolated for picking fights.

“I’ll tell you, I was before with a representative of Mongolia,” she said. “Italy’s isolation, from a cultural point of view, is the last thing that could happen.”