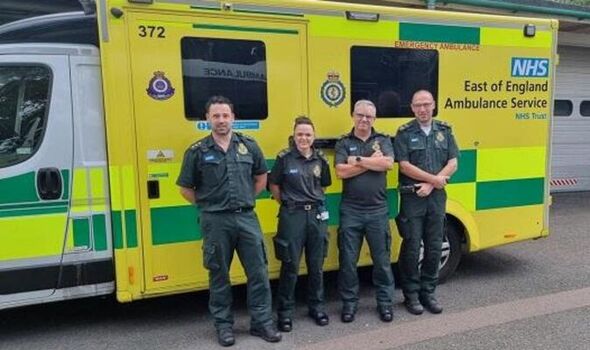 Jeremy Williams, 53, was resuscitating the 30-year-old woman at her home when he was gripped by agonising pain.

His ambulance pals realised what was happening and worked side by side on both casualties before transferring them to separate hospitals.

Jeremy had two stents fitted to unblock the arteries around his heart.

He and the original patient, who fell ill in Stewartby, Bedfordshire, have now recovered. Jeremy, of Kempston, said: “We knew it was a bad job when we arrived because the patient’s condition was so serious, but it got worse.

“My pain was so excruciating. But if I was going to have a heart attack, I couldn’t have had better people around me. I will be forever grateful.”

Paramedic Shaun Whittington, who led the team effort to save both patients, said: “When we arrived at the hospital Jeremy looked like he was about to die. After the surgery it was like he had just come home from holiday.”