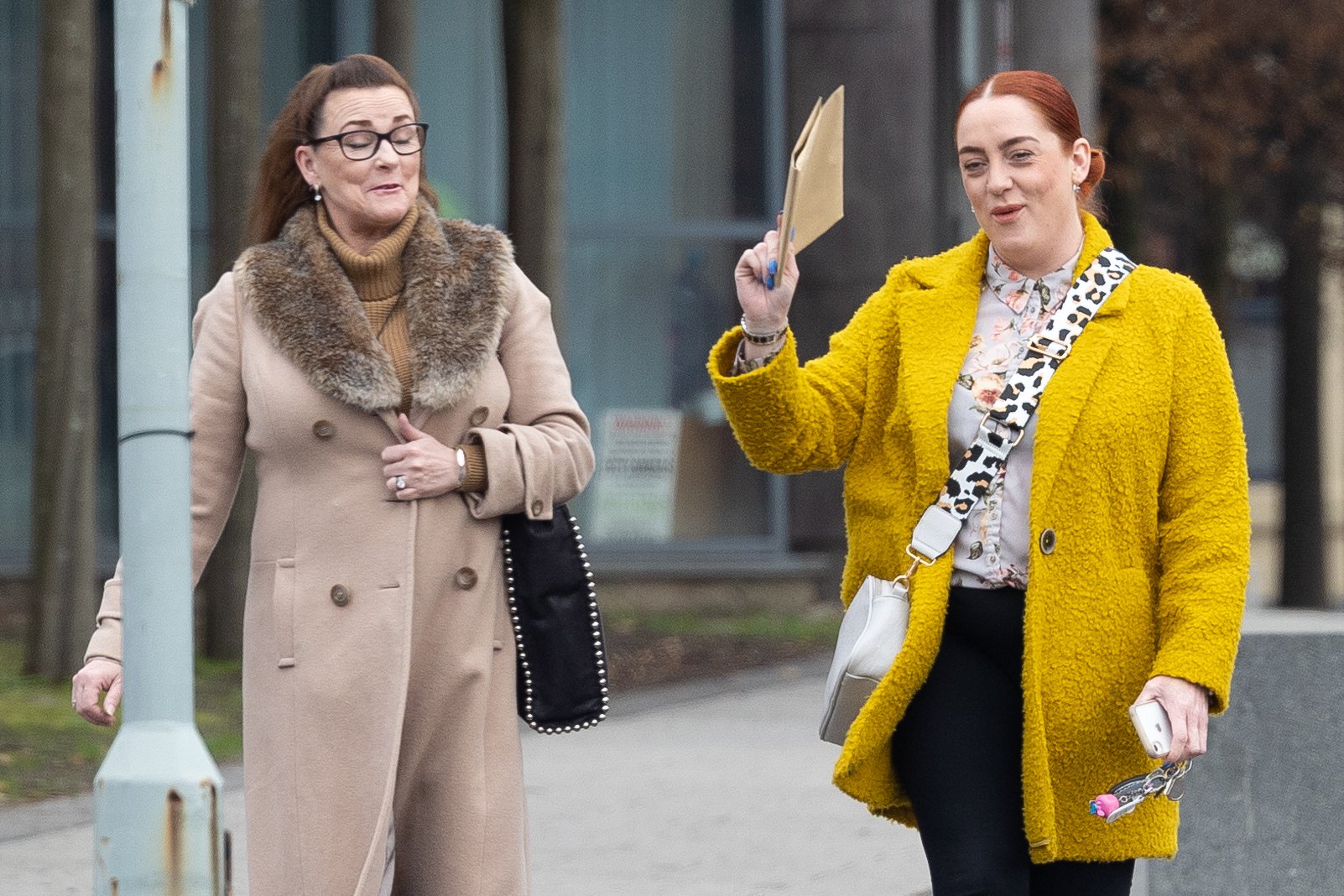 A former boxer wrestled her ex-boyfriend to the floor with her friend after she caught him on a date with another woman.

Anna Hambleton, 35, a former White Collar Fighter, ‘tag-teamed’ with her friend Lousier Brown, 53, to launch the attack on James Kelly, continuously punching him in the back of the head.

Punters at the Golden Hind Pub in Stockton, Greater Manchester, watched on horrified as the two mums then began to kick Mr Kelly, 40, in the back.

Hambleton and Mr Kelly, who were ‘on-and-off lovers’ from early 2020, have been locked in a bitter feud since they broke up in September 2021.

However it was claimed just weeks before the beating that Mr Kelly had thrown paint stripper and eggs at Hambleton’s car.

Last month, he was due to face trial having been accused of harassing Hambleton, but the charge was dropped as no evidence was offered.

In a victim impact statement, Mr Kelly said: ‘Due to the incident I have not been outside much as I feel like everyone is against me.’

At Tameside Magistrates’ Court, mum-of-four Hambleton and mum-of-five Brown, both of Offerton, admitted common assault and were each fined £120.

Robin Lynch, prosecuting, said: ‘Miss Hambleton began to push her finger close to the complainant’s face and began to shout at him. During this time, Miss Brown punched the complainant in the back of the head a number of times.

‘Miss Hambleton then tackled the complainant to the ground and punched him whilst Miss Brown kicked him in the back several times. The defendants walked off and returned shortly to shout at the complainant.’

After being arrested, the pair, who had been drinking heavily before the attack, said they could recall nothing of the incident.

Defending, Michelle Mann said: ‘The pair met due to their close proximity, only living two doors apart from each other on a street in Offerton. They were on and off for the entirety of their relationship.

‘In one of their off periods, the complainant threw paint stripper over her car bonnet. She reported the incident to the police. However, as is often the case with on-off relationships, the pair got back together.

‘Yet soon after they broke up again and in response, the complainant again threw paint stripper and eggs at the car. Hambleton, who was out at the time, was then followed by the complainant back to her house.’

Ms Mann added that once inside the home, Mr Kelly smashed the windows of Hambleton’s home, prompting her to ask the housing association to relocate her.

She explained: ‘However, the association did not re-house her and she began staying at Ms Brown’s address. As a result of their breakup, she started drinking heavily with Ms Brown.

‘Miss Brown herself had her own issues with the complainant. On one occasion following the breakup, Miss Brown was shopping in a local shop near her address when the complainant saw her and started shouting abuse at her.

‘The complainant made insults about Brown’s disabled 18-year-old son. The incident was so serious that the shop staff had to remove him from the shop.’

COVID-19: Train passengers suffer one of the worst periods on record for cancellations