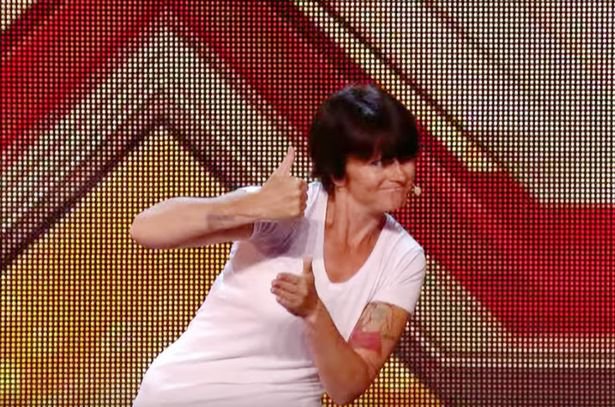 A former X Factor contestant is behind bars again after subjecting her former therapist to a second campaign of abuse and hate.

Sharon Stewart, 49, who appeared on the reality show in 2015 as ‘Shazpaz’, bombarded her psychotherapist with abusive emails and sent a ‘gift card’ inside which she wrote ‘die’ to his home address.

She also wrote ‘it’s all over now’ and ‘it was nice mucking your life up.’

The mother-of-two, from Walmer near Deal in Kent, was previously given an indefinite restraining order which banned her from contacting her counsellor after she was last jailed for three years in 2018 for stalking him.

But within two weeks of being released from prison at the end of July 2021, Stewart re-started her hate campaign against her victim – abuse that didn’t end until she was arrested on August 10.

Appearing at Canterbury Crown Court she admitted five breaches of the indefinite order.

She claimed she had started the abuse all over again because she was homeless upon her release from prison and wanted to get back behind bars.

During her previous three-year-long campaign Stewart had set up fake Facebook accounts, bombarded her victim with hundreds of messages, slashed his car roof, threw food at his door, emptied bins on his driveway and tried to break into his home with a brick.

Her victim was fired from his job at a counselling centre as a result of bogus claims she made up about him.

He was also so frightened he installed CCTV and contemplated moving house.

Prosecutor Imogen Nelson told the hearing in 2018: ‘This was a protracted and disturbing campaign of stalking which totalled more than 100 events over three years.

She said Stewart, who cared for her older husband at the time, had been counselled by her victim for just five months before her behaviour towards him became ‘suggestive’ and she started asking him to socialise.

When he declined her advances, she started bombarding him, his son and his employer with emails.

The counsellor was questioned by police for five months but no further action was taken against him.

She sent him one message of a crossbow and a gun with the chilling threat ‘which one will it be?’

In another vile message, she told him ‘goodbye, good riddance and die slowly please!’

Recounting the latest campaign, Stewart’s victim told police: ‘She was released at the end of July and within about a fortnight threats to my life and harassment began again.

‘Once again I took this as a threat to my life.’

Mitigating, Kerry Waite told Canterbury Crown Court Stewart wanted to be arrested because she was homeless upon her release from prison.

She added: ‘She was at a very low ebb and felt at the time a return to prison would be best for her and it is very sad when people find themselves in that position.

‘She understands she cannot conduct herself in that way.’

Stewart was jailed for 16-months.

Judge Catherine Brown told her she had ‘no doubt’ her threats would have carried on if police had not arrested her.

The judge added: ‘You stalked your victim who had the threatening conduct by you take place for more than three years, and the impact on him was considerable.

‘The contact you made with your victim was abusive and threatening.

‘The renewed campaign against your victim continued until August 10 until you were arrested, and I have no doubt you would have continued had you not been arrested.’