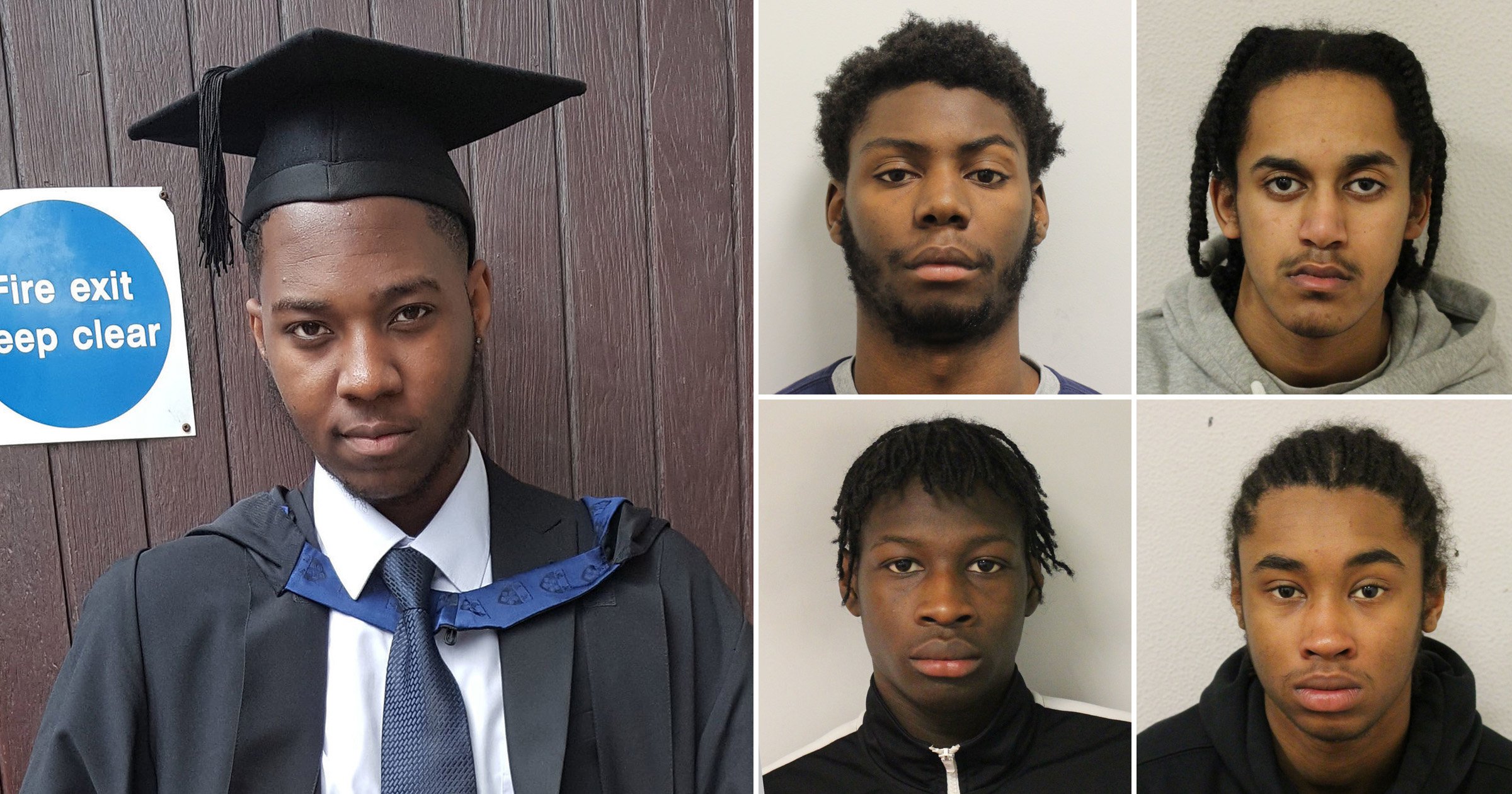 Four gang members have been handed life sentences after stabbing an NHS worker to death in a random killing.

David Gomoh, 24, was on the phone to his girlfriend when he was attacked and bled to death in front of his horrified family after staggering home.

The marketing graduate was ‘entirely unsuspecting’ when he was jumped on in Canning Town, London, and in the ‘wrong place at the wrong time’.

He was targeted during a ‘meaningless feud’ between warring gangs which was described in court as a ‘petty but fatal game of one-upmanship’.

Mr Gomoh was stabbed at least 10 times after being picked at random by the Northside Newham Gang members to send a message to rival Custom House and Beckton gangs.

The group fled in a stolen car and investigators later found drawings depicting the unprovoked slaying in one of the defendants’ bedrooms.

Now four young men – one of whom turned 18 during the trial – have been jailed having been found guilty of his murder after a trial.

David Ture, 19, of Camden, Vagnei Colubali, 23, of Enfield, Muhammad Jalloh, 19, of, Wapping, and Alex Melaku, 18, of Telford have all been locked up for murder.

The defendants were also convicted of conspiracy to cause grievous bodily harm with intent to another man who got away and has never been identified.

All four were handed life sentences, with Colubali and Jalloh given minimum terms of 27 years, Ture handed a minimum of 26 years and Melaku to serve at least 21 years.

Judge Mark Lucraft QC, the recorder of London, said the killers had carried out a ‘brutal murder’ which had involved a ‘significant degree’ of planning.

He said: ‘The four of you are part of a north-side Newham gang, who have a feud with gangs on the south-side of the borough.

‘I have no doubt there are many who live in all parts of the borough impacted by the acts of those like the four of you, who seem to kill simply for the sake of it and show little or no regard for human life.’

He added: ‘David was a lone, innocent and entirely unsuspecting victim.’

Mr Gomoh’s family were already in mourning at the time of his death after the recent passing of his father.

In a victim impact statement, his mother Marian, said she is ‘haunted’ by recurring nightmares about what happened, adding: ‘I felt numb, paralysed by grief and pain. Why David?’

She said the ‘psychological and emotional torture escalated’ during the trial, as she listened to details of what happened to her ‘beautiful son’.

She added that he had ‘so much to live for; so much unfulfilled promise and so much needed by the NHS trust he worked for to help distribute PPE and other stocks, so much humanity and compassion to share’.

His murderers had ‘walked uninvited into our lives and destroyed David’s life’, she said, adding: ‘Their contempt for a human life is just beyond comprehension.’

His sister Lizzie paid tribute to her ‘fun-loving, amazing brother’ and said his death has had a ‘devastating impact on us all’, describing the family’s grief as still feeling ‘so raw and so fresh’.

Referring to her brother’s killers, she said: ‘I hope they will eventually show remorse.’

In a statement released after the sentencing, detective chief inspector Laurence Smith, who led the investigation for the Met Police, said: ‘These four defendants carried out a senseless attack on a completely innocent man and there is absolutely no doubt that London is a safer place with them behind bars.’