PARIS — World leaders and dignitaries gathered in Paris on Monday as France marked a national day of mourning for Jacques Chirac, the former French president who died last week. 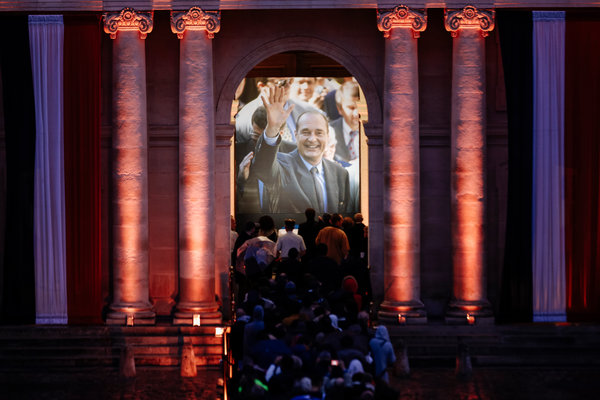 After Mr. Chirac’s family met privately on Monday morning, President Emmanuel Macron presided over a military ceremony in his honor in the courtyard of the Invalides monument in central Paris.

A military band played the Marseillaise, France’s national anthem, before Mr. Chirac’s coffin, which was draped in the red, white and blue French flag, as a somber-looking Mr. Macron stood by.

A funeral procession then brought the coffin to the Saint-Sulpice church, about a mile east, where former French presidents and dozens of French officials and politicians gathered for a religious service.

One of Notre-Dame Cathedral’s main bells rang out to mark the procession’s departure, the first time it has tolled since a fire ravaged the building in April. Small crowds lined the streets and clapped as Mr. Chirac’s hearse, surrounded by a motorcade, slowly drove by.

President Trump was represented by Jamie McCourt, the United States ambassador to France.

Mr. Chirac, who died at age 86, had one of France’s longest-running political careers, including terms as a legislator, cabinet minister and prime minister, and 18 years as mayor of Paris.

He served two consecutive terms as president of France, from 1995 to 2007, and his death last week was followed by an outpour of nostalgia — less for his domestic policy record than for his personality, as generations of French people fondly recalled Mr. Chirac’s bon vivant charm.

Mr. Macron, in a speech on Thursday after Mr. Chirac’s death, said that “over 40 years” in politics had made the former president “a familiar face.”

“We the French have lost a statesman whom we loved as much as he loved us,” Mr. Macron said.

On Sunday, thousands waited in line in the rain to enter the Invalides monument, where Mr. Chirac’s coffin remained on display late into the night. Audio passages of some his most famous speeches played in the background, and booklets were handed out with excerpts from his writings.

A minute of silence will be held in schools and public offices at 3 p.m. on Monday.