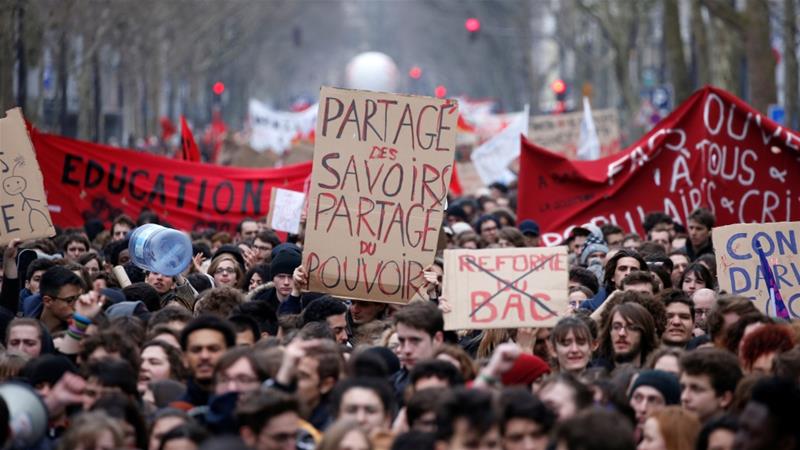 Hundreds of thousands of public sector workers have marched across France to protest against the government’s economic policies, including plans to reform public services and slash jobs.

Staff from the national railway company, commonly known as SNCF, were joined on Thursday by employees of the national carrier Air France and other public servants as they took to the streets of the capital, Paris, and other major cities.

The Ministry of Interior said 323,000 people took part in the nationwide protest, while the country’s second largest trade union, the General Confederation of Labour, put the number at about half a million.

Al Jazeera’s Natacha Butler, reporting from Paris, said the SNCF has been operating at a loss for a number of years.

“It has $50m of debt and the government says it must change to remain competitive, especially because under EU rules in 2020, the company will lose its monopoly,” she said.

Edouard Philippe, France’s prime minister, has previously said the government cannot not afford to sustain the same level of spending.

“The world is changing, the SNCF must change with,” he said in February. “Faced with competition, SNCF cannot remain the only company to recruit workers under a special status.”

Workers are planning to hold protests two days out of every five through April to June.

This is not the first time workers have taken to the streets to demonstrate against Macron’s labour plans.