PONTOISE, France — In the town of Pontoise, which gently slopes upward from the Oise River about 15 miles northwest of Paris, Mayor Stéphanie Von Euw is laser-focused on her new vaccination center — a blocky, sand-colored recreational facility where up to 450 shots are administered daily to those over 75 or otherwise at high risk.

Ms. Von Euw was energetic on a recent visit, chatting with doctors and vaccine recipients. But here in Pontoise, as in many other parts of France, there is no hiding that a winter of pandemic doldrums has set in.

“To keep my chin up, I try to follow this rule: I take one day at a time,” Ms. Von Euw said across a table covered with chocolate boxes left by recent vaccine recipients. “If I look to the future, I lose myself.”

Caught between infection rates that remain stubbornly high despite months of economically damaging restrictions and a slow-moving vaccine rollout, there is a growing and glum sense in France that the country’s battle against the pandemic has stalled. 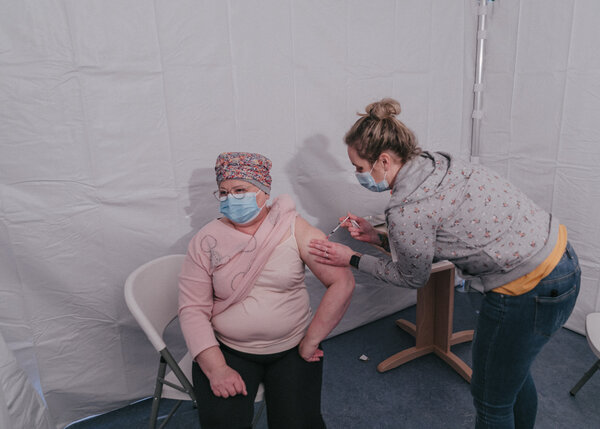 Last month, the country was bracing for a third nationwide lockdown when President Emmanuel Macron unexpectedly decided against it. He made a calculated gamble that he could tighten restrictions just enough to stave off a new surge of virus cases while avoiding the heavier economic and social toll of more drastic measures like those currently in force in Germany or Britain.

Weeks later, it is still unclear whether that bet will pay off or if, as some health experts have warned, there is little chance of containing the spread without a strict lockdown.

The average number of daily infections, at about 20,000, has neither spiked nor fallen much over the past month. But more contagious variants from other parts of the world are spreading.

Arnaud Fontanet, an epidemiologist at the Institut Pasteur who is also a member of the government’s Covid-19 advisory council, said on Sunday that the chances of containing the epidemic without a tight lockdown are thin.

“Everything will depend on our ability to control the spread of the British variant,” Mr. Fontanet told the Journal du Dimanche. “If we wait too long, we could be taken by surprise by the epidemic’s acceleration.”

Hospitalizations are stable but still at high levels, with about 28,000 Covid-19 patients across the country, including about 3,300 taking up more than half of the capacity in intensive care units.

Some experts said they worry that a plateau in infection numbers at these higher levels leaves little room to maneuver if hospitals face a new spike in cases.

The government is projecting optimism, and the health minister even told Franceinfo radio on Tuesday that the country might not have to go under lockdown ever again. But the public’s mood is one of uncertainty.

“There is a lot of wavering,” said Odile Essombé-Missé, 79, who was standing in line at the vaccination center in Pontoise for her 85-year-old husband’s injection. Asked about a new lockdown, she just shrugged.

“We put up with it,” she said finally, with her eyeglasses, perched atop a colorful blue and orange face mask, fogged over.

Mr. Macron has vowed that all adults who want to get vaccines would be offered them by summer’s end.

More than 2.2 million out of France’s population of 67 million have received at least one dose so far, and nearly 250,000 have been fully vaccinated. But with 3.1 doses administered per 100 people, according to a New York Times database, France still trails neighbors like Italy or Spain.

“We could double, even triple the rhythm,” Ms. Von Euw said, if her center were allocated more supply of vaccines.

But the European Union has struggled in recent weeks to secure a steady supply of doses. The French government has managed to open up a promising 1.7 million new appointment slots in the coming weeks as deliveries roll in.

“I’m not yet immune, but I’m still reassured,” said Eliane Coudert, an 80-year-old retiree who had come from the neighboring town of Éragny to Pontoise for her shot. She was sitting patiently with a handful of newly inoculated companions in a small waiting area, where doctors monitor for adverse side-effects.

Ms. Coudert, who is diabetic, said she was determined to get vaccinated so she could see her great-granddaughters again.

France has been under a night curfew since mid-January and restaurants, cafes, museums or movie theaters are closed, turning even the liveliest of French cities into ghost towns after 6 p.m.

Meghan Markle praised for tackling ‘stigma and shame’ around miscarriage