PARIS — A sudden frost, the worst in decades, has ravaged a French wine industry already reeling from the effects of the coronavirus pandemic and what is known among winegrowers as the “Trump tax.”

Candles and small fires glittered across vineyards and orchards last week, their pretty flickering belying the disaster, as winegrowers and farmers tried everything to ward off the frost cutting the life from newly formed shoots and buds. A layer of smog from the fires formed over Lyon and areas of the southeast.

But by the time the cold snap ended, destruction had spread across most of France’s winegrowing regions, including the Rhone Valley, Bordeaux, Burgundy, Champagne and the Loire. Jean-Marie Barillère, the head of a major wine industry association, told the French daily Le Figaro the frost had hit “80 percent of French vineyards.”

The frost followed a period of mild weather with the result that plunging temperatures caught rural France by surprise. Vines were the worst hit but almond and fruit trees were also affected, as well as some other crops, including beets and rapeseed.

Emotion ran high throughout French wine regions, the soul of the country in many ways.

“I heard someone say it was like the loss of a family member,” Eric Pastorino, the president of the Côtes de Provence appellation, a legally defined and protected wine-growing area, told Le Figaro. “It may seem puerile, but that is close to what I feel. Perhaps only winegrowers can understand this sentiment, but we have found ourselves out in the vines in the morning with tears in our eyes.”

Anne Colombo, who is president of the Cornas appellation, a prized winegrowing area in the Rhone region, said it was the worst frost in more than a half-century. “We’ve had greater problems with hail than frost, but this year was devastating,” she said.

Reeling off the names of great Rhone wines — Condrieu, Cornas, Côte Rotie — she indicated they were all severely affected. Losses could range as high as 80 percent. “It’s a terrible blow after the virus which has shut restaurants and bars, and so slashed demand, and after the Trump tax.” 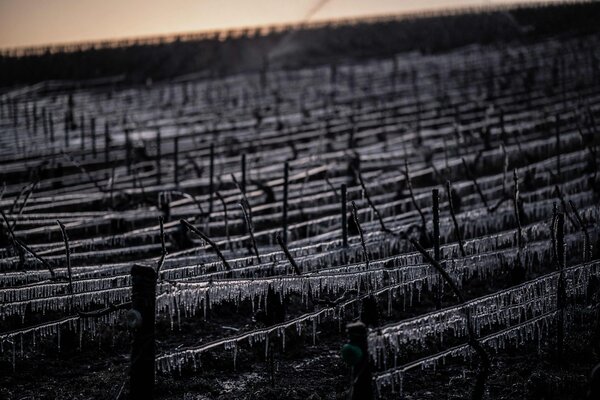 Donald J. Trump, the former president, imposed tariffs on French wines as a result of various subsidy and tax disputes with France. The import taxes contributed to a 14 percent plunge in global French wine and spirit exports last year. With air traffic way down, duty-free wine sales have also plummeted.

French government ministers fell over themselves promising emergency aid to stricken winegrowers and farmers. The French attachment to the land is fierce; no politician can afford to ignore this. Jean Castex, the prime minister, said the ceiling on an agricultural calamities fund would be lifted and “exceptional” assistance given.

Julien Denormandie, the agriculture minister, said the frost was “an episode of extreme violence that has caused very significant damage.” He convened an emergency meeting Monday with winemakers as well as fruit, vegetable and cereal producers to review the damage.

“The government will help us, but probably not to the extent of our losses,” Ms. Colombo said. “Right now, they are spending like there is no tomorrow.”

Since the coronavirus pandemic began, the government of President Emmanuel Macron has decided to spend whatever it takes to compensate people for lost jobs and business. The final cost, and how the debt will be paid back, are unclear. It seemed a similar approach would be taken to the agricultural disaster.

“It’s incredibly hard, very violent,” David Joulain, an almond grower in the south, told Agence France-Presse. “I have the feeling one knee is on the ground. Every tree I have tested is dead, I am afraid that I have lost the whole crop.”