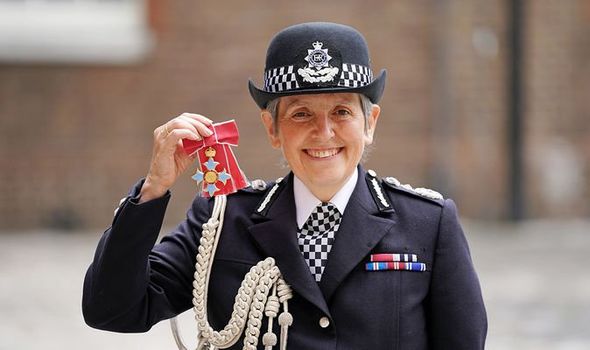 And she won the backing of her rank-and-file officers as the Home Secretary dismissed calls for her to be sacked.

She was handed the “full support” of frontline bobbies on the day Priti Patel announced the extension as head of London’s Met Police.

Earlier this week, Dame Cressida, Britain’s most senior police chief, faced criticism from public figures who wrote to Boris Johnson accusing her of presiding over “a culture of incompetence and cover-up”.

One, former Tory MP Harvey Proctor – who was falsely accused of being a member of a non-existent VIP child sex ring – described her contract extension as obscene yesterday.

But Ken Marsh, chairman of the Metropolitan Police Federation, representing more than 30,000 London officers, said Dame Cressida had the “full support of the rank and file”.

He added: “Whilst the federation does not always agree with the commissioner – the same goes for anyone who holds that post – we think she is doing a good job in difficult circumstances.

“We have worked with this commissioner for a number of years now and believe she is still the best candidate.

“We know her to be an ethical, courageous and highly competent police leader who genuinely cares about London, its citizens and her officers.” Dame Cressida, 60, has weathered a series of controversies including Operation Midland, the botched inquiry into the so-called child sex ring, and murder rates among young people.

Mr Proctor was joined by Baroness Doreen Lawrence, Lady Diana Brittan and broadcaster Paul Gambaccini in penning the open letter after brushes with the Met.

The ex-MP said: “I am bitterly disappointed by the decision. It is obscene. I believe the Government will rue the day of this terribly bad and wrong decision.”

Ms Patel said Dame Cressida’s extension until April 2024 would “provide continuity and stability as we emerge from the coronavirus pandemic”. She added: “Londoners know there is more to do to keep our capital safe, including by driving down violent crime.”

Dame Cressida, who took a pay cut when she became commissioner in 2017 and now earns about £230,000 a year, said she was “immensely honoured and humbled” and “proud to continue to serve my city.”

She added: “In the last four-and-ahalf years Met teams have dealt with some extraordinary challenges, including most recently in the pandemic, and delivered some fantastic results – critically in reducing violent crimes. In addition, we have grown and modernised.

“I look forward to continuing to work with my dedicated, courageous colleagues and the public to create an even more visible, stronger and professional Met.”

UK weather: ‘Do NOT travel’ warning issued as rain and flooding smashes Britain