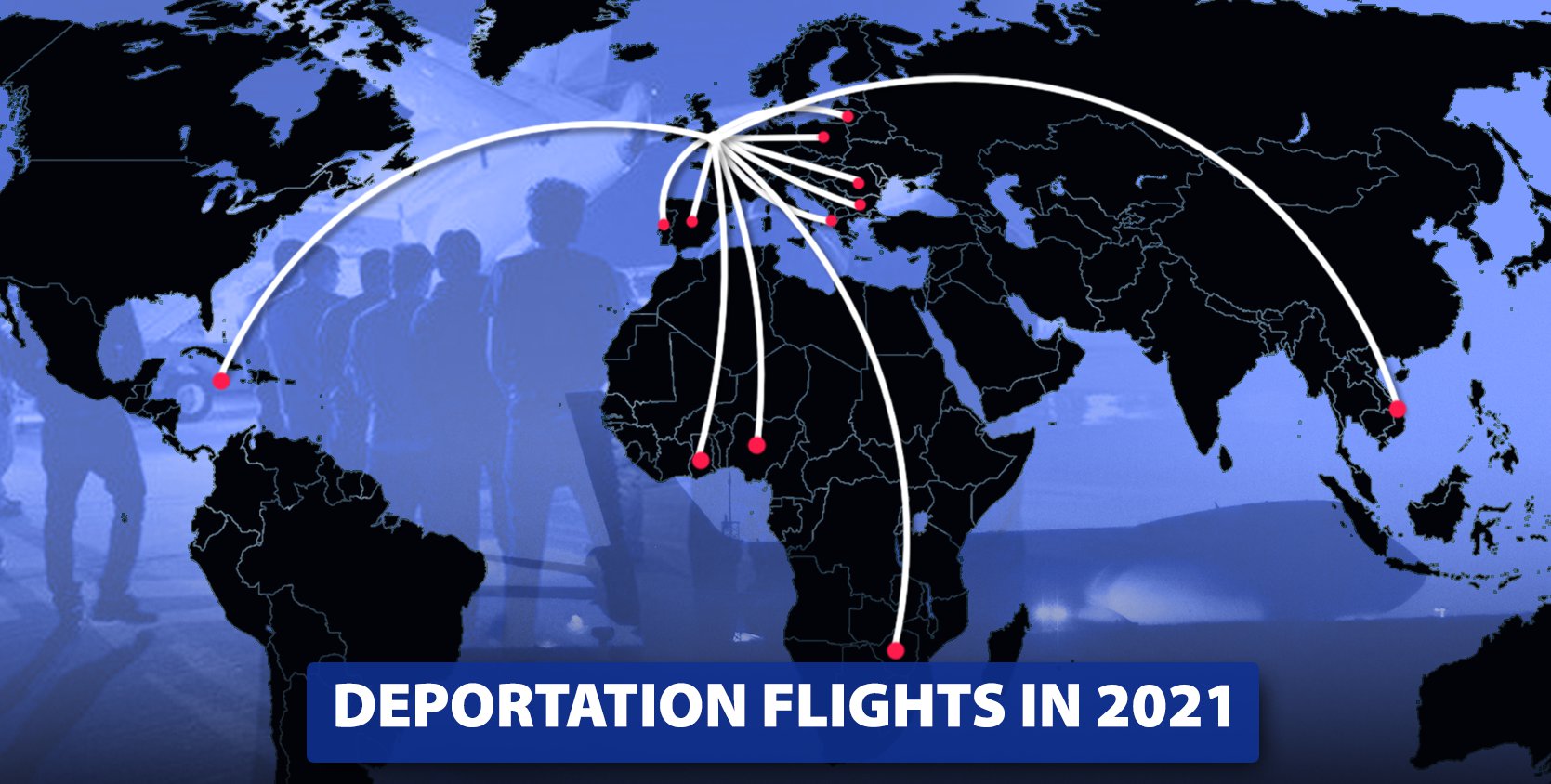 Campaigners have called for the government’s global roster of deportation flights to be urgently scrutinised amid reports of families being ‘torn apart’ and people being given just days to appeal.

A list of nations to which the UK has returned deportees to has been disclosed ahead of a flight scheduled for Jamaica tomorrow.

The 13 countries flown to so far this year include Lithuania, Poland and Romania, as well as nations in Africa and the Far East.

Two flights each have flown to Ghana, Nigeria and Vietnam, with one to Zimbabwe, according to the information released to Metro.co.uk under the Freedom of Information Act.

The so-called ‘mass’ removals are intended to expel people convicted of serious crimes – such as murder and rape – persistent offenders and those deemed a threat to national security.

However, one prominent campaigner called for more scrutiny of the decision-making process after an apparent U-turn over a mother and daughter set to be deported tomorrow.

The pair were removed from the list for the flight with just days to spare, the Movement for Justice (MFJ) campaign group said.

Last-ditch appeals have been cited by both the government and opponents for depleting numbers on deportation flights to Jamaica, with one in August 2021 leaving with seven people on board.

MFJ told Metro.co.uk that targeted returnees being given short notice was hampering their ability to make appeals.

Bishop Desmond Jaddoo, a campaigner for equality and social justice, told Metro.co.uk: ‘While respecting that Britain needs to protect its borders, you have to ask whether these flights are economically viable and if the ends justify the means.

‘At a time when COP26 is being held in Glasgow, the regularity and frequency of these flights, with just seven people onboard in one case, does pose questions. Is it the case that the government is making a statement in an expensive way?

‘Some of the cases are falling outside of the narrative and U-turns are taking place. I’m not going to be critical of the U-turns, because they show the Government is listening.

‘However, generally if a representation is not made or people do not have the support to make a representation, would those flawed decisions be brought to the forefront and dealt with?

‘We also have the fact that tomorrow’s flight to Jamaica is the fourth during Covid. We have to look at these decisions as a global picture.’

Mr Jaddoo has reached out to those being deported on tomorrow’s scheduled flight, which led to a protest outside the Jamaica High Commission in London last week.

Campaigners also told Metro.co.uk that some of those due to be deported have no criminal convictions.

Last year, the Caribbean island was among 22 destinations to which deportees were returned. Most of the countries were in Europe, with the list also including Kosovo and Pakistan.

The Home Office refused to provide a breakdown of the costs of the flights and the offences committed by those onboard, citing cost exemptions under the Act.

Mr Jaddoo responded to the disclosure by calling on the government to make the decision-making process more transparent and accountable.

He said: ‘While the UK needs to protect its borders, equality and social justice is for everyone and there needs to be more independent scrutiny and monitoring of the decision-making processes.

‘In some cases, families are being torn apart and it’s heartbreaking to see.

‘We should look at how the decisions are being scrutinised and whether this could be done independently and involve members of the community to ensure that everyone receives due process. This needs to happen urgently.

‘We also have to look at the economic viability and the damage to the environment of flights that sometimes have very low numbers.’

Addressing the time detainees are given to organise legal representation in detention centres, Karen Doyle, national organiser at MFJ, said: ‘People are being given five working days’ notice of a charter flight. They might have been taken into detention with just two weeks to go.

‘On top of that, the fax machines there sometimes don’t work properly and they can’t get documents to their lawyers or to support organisations.

‘Plus, people who were brought in two weeks ago still don’t have a lawyer from the duty advice scheme because it’s almost impossible to get one from there. It is just not enough time, it is not fair on the people.

‘People have been taken advantage of by unscrupulous solicitors for years who haven’t put in the right documents for them.’

Since April 2020, the government has used 95 charter flights to return people around the world. The other countries flown to so far this year were Albania, Bulgaria, Hungary, Portugal and Spain.

A Home Office factsheet states that returnees are given the opportunity to raise appeals that are ‘fully considered’ and can be pursued in the courts.

Under law, deportees are defined as people who are not ‘conducive to the public good’, which includes convicted criminals, repeat offenders or someone who represents a threat to national security.

A Home Office spokesperson said: ‘We make no apology whatsoever for seeking to remove those who abuse our hospitality and have successfully deported 8,441 foreign national offenders since January 2019.

‘Charter flight operations are an important means to return disruptive individuals [where there are] limited scheduled routes, particularly during the global coronavirus pandemic.

‘Unfortunately, late legal claims – which are often unfounded or without merit – can result in people being removed from flights at the last minute.

‘Our New Plan for Immigration will stop the abuse of the system and expedite the removal of those who have no right to be here.’

The response to the Freedom of Information Act requests states: ‘Costs for individual flights will vary due to a number of different factors. The use of charter flights is a standard part of Immigration Enforcement activity.

‘Scheduled commercial flights are used for the majority of returns but this is not always an option. We work with an independent commercial broker to ensure we get best value for money.’