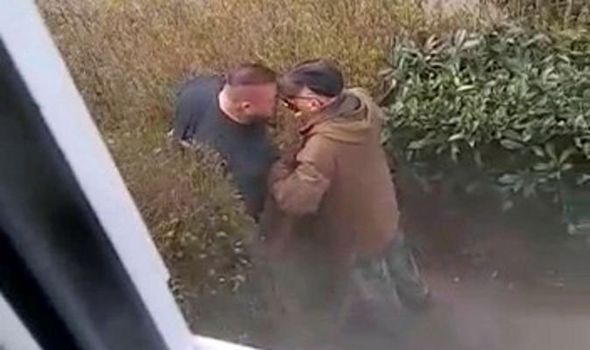 Gary Wynn, 35, and Keith Thomson, 72, were embroiled in a fiery row after Wynn verbally abused the pensioner’s wife, Susan, 78, who was clearing up a communal path. The retired builder said: “My wife was cleaning the path which runs between our two properties and doing some weeding.

“We have lived in this house since 1993 and paid rent to a housing association. We try and keep the paths clean and tidy for the benefit of all the residents here.

“Suddenly Wynn comes storming out shouting and swearing at my wife calling her a ‘b**ch’.

“I said it’s a public right of way, but he said he owns it. He said he could dig it up and put gravel down if he wanted to.”

Wynn subsequently launched a foul-mouthed tirade at Mr Thomson, branding him a “c**t” and “p***k”.

Mr Thompson said Wynn claimed the path belonged to him because he owns his house whereas the pensioners live in a council owned property.

As the row escalated, Wynn headbutted the elderly man.

Mr Thomson swung a punch back at Wynn before staggering back into his house in Kidderminster, Worcs.

Mr Thomson said: “Wynn is a big man, but I don’t get scared easily. He headbutted me and I brought my fist round to push him away. I was scared he was going to headbutt me again.”

The grandfather-of-three suffered concussion and a badly bruised head following the incident on March 21 this year.