Just Stop Oil protesters have infuriated Londoners attempting to drive through Parliament Square, near the House of Commons, as roughly a dozen of the activists blocked the main road, holding up banners decrying the production of fossil fuels in the UK. In a video released on social media, commuters can be seen furiously honking their cars as the protesters refuse to move. The group later sit down as the traffic in front of them continues to build up. Another video shows the group chanting “Just stop oil” repeatedly while outside of the entrance to No 10 Downing Street. 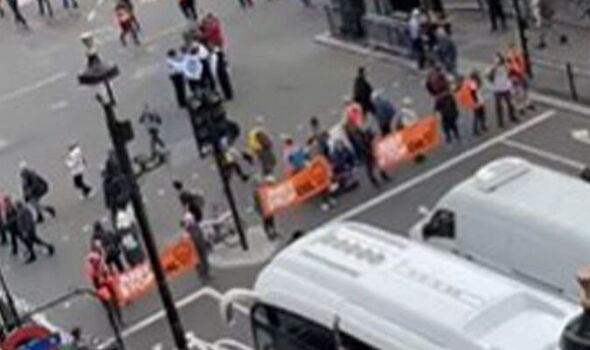 After a year in which the blockading of roads was popularised among protesters by Insulate Britain, Just Stop Oil appears to have upset hundreds of commuters on Tuesday by stopping traffic in central London.

Alongside a video released by the organisation on Twitter, the activists warned that the disruption would end when fossil fuel production in the UK was put to an end.

They wrote: “Oil hasn’t been stopped yet, so surprise surprise, we are back.

“The disruption will end when the Government halts all future licensing and consents for the exploration, development and production of fossil fuels in the UK.”

It follows several days of protesting around London, with the group reportedly glueing themselves to the roads.