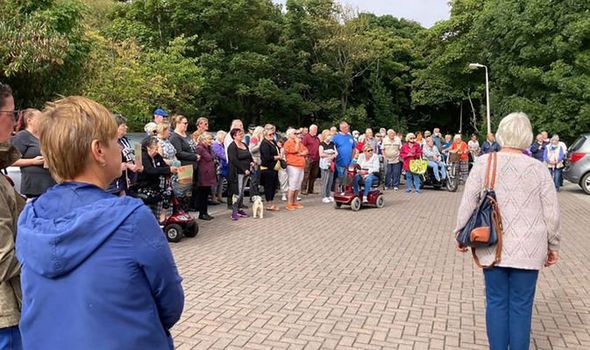 Citizens have become so angry at what they’ve called “appalling” healthcare services they’ve held protests this week. Holderness Health, which was formed following the merging of several GP surgeries in East Yorkshire, including Church View Surgery, Hedon Group Practice and St Nicholas’ Surgery, is facing particular criticism with some patients claiming they’re even being refused appointments.

Jim Blake, a 70-year-old patient at St Nicholas’ in Withernsea, near Hull, said: “Most of the patients are fed up with it.

“The fact that it takes two hours to get through on the phone is ridiculous, and the chances of actually getting to see someone face-to-face are long gone. You just don’t get to see them at all.”

The pensioner told Hull Live he had on one occasion been told by St Nicholas’ staff that there no appointments available “full stop”, and that when asked what he could do instead, told him they were “unable to help”.

Staff at all of Holderness Health’s clinics have expressed their “disappointment” and Jim admits the employees are “sympathetic”.

But he added: “This isn’t about me or us as individuals, it’s about the really vulnerable people like the 76-year-old lady up the road who can’t speak to anybody when she needs medication.

“There is a website you can use, but a lot of people aren’t good with the internet.

“Everything is done over the phone now. I also believe it’s a dangerous process to be writing out prescriptions for patients you haven’t actually seen.”

But a GP yesterday admitted family doctors are unlikely to see as many patients face-to-face as they did before the pandemic.

Nevertheless, Jim joined other patients for the protest on Monday on Withernsea Pier, which is near St Nicholas’ Surgery.

Following the demo, a spokesman for Holderness Health said: “A return to only face-to-face appointments would result in fewer appointments being available overall as each appointment requires a fixed timeslot and allocated time for cleaning between patients.”

Covid procedures remain in place for NHS staff, while the group said it had recruited more doctors to meet the high demands for consultations.

“The last thing we want is for people to be unsafe in our buildings when they are already coming to see us because they are unwell,” the spokesman added.

“We feel incredibly disappointed that local residents feel the need to protest against the NHS at a time when it is under such severe pressure.

“Setting the scene as a battleground between doctors and patients is distressing and destructive.

“Yes, there are problems. Yes, many of these are difficult to fix. But we are willing to talk and to come up with solutions together. Like practices across the country, we admit that we are struggling to cope.

“Our team is exhausted and has worked under immense stress for 18 months. We can clearly see the impact on the wellbeing of our staff and fear that they will choose to leave the profession.”