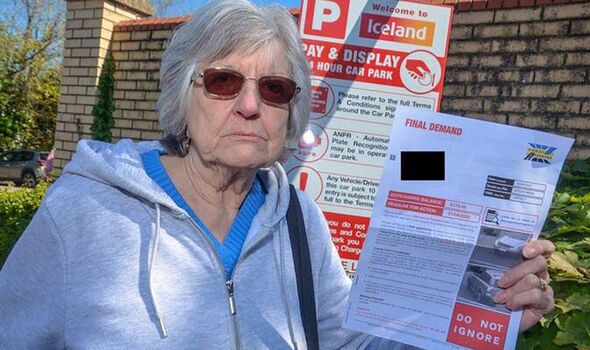 Mary Jones and her husband, Mike’s woes began when they visited the Barnstaple branch of Iceland in North Devon. They parked their car in what they thought was the supermarket’s car park, but later discovered that it is managed by Excel Parking.

Mary went to pay for a ticket, but the machine did not give her a ticket or return the money she had inserted, reports Devon Live.

Explaining the incident which took place on January 18, she said: “My husband stayed in the car because he’s not able to do any walking at the moment.

“I went to the machine to get a ticket out, put the money in and no ticket, nor my pound came out.

“I went and told him to keep an eye out in case the chappie came along.

“I had a word in Iceland to explain what had happened, and that I did not have a ticket. The lady doubled checked and confirmed that should be ok.”

After around 40 minutes of shopping, she returned to the car and drove back to their home in Chulmleigh, Devon.

“I didn’t want to stay long, as you don’t hang around with frozen goods,” she said.

Then on February 2, she received a letter from Excel Parking, addressed to her husband, with a fine of £100.

She said: “I was not impressed having thought that it was all sorted.

“I got hold of them on the telephone and explained what had happened. All I received in reply was them saying it was not down to Iceland to say I could park there.

“I also explained that if they checked the money that had gone into the machine, it would not tally by at least a pound with mine had gone in.

“The proof was there if they work their accounts correctly.”

Mrs Jones appealed the decision, but the claim was rejected.

In its response to her, Excel Parking wrote: “We are unable to accept your appeal. The signs at the car park make it clear that a valid ticket must be purchased for all vehicles which park or enter the park, giving clear notice that the land is private property and that a charge of £100 will be levied if vehicles park outside the terms and conditions displayed.

“Signs also state that when a ticket is purchased, the full and accurate vehicle registration number of the vehicle parked must be entered into the P&D ticket machine.

“The above detailed vehicle parked without payment of the parking tariff for the vehicle on site and you became liable for the charge advertised.”

It adds: “We note your comment that you were unable to purchase a ticket because the machine was not working.

“In those circumstance if you should have sought alternative parking or phoned the helpline.

“By failing to make payment for the period of parking question, you became liable for the charge notice issued.

“Signs on site clearly display a helpline telephone number which is available to use by motorists who have any problems or queries in respect of their use of the car park.

“In this case, the driver should have called that helpline so that arrangements could be made, or advice given in respect of any problem they had.

“We note your comments in respect of you being offered advice on how to park.

“Iceland staff on site are not authorised to allow motorists to park in contravention of the terms and conditions displayed at the car park.

“It is the motorist’s sole responsibility to ensure they park correctly.

“If you were unable to park correctly, you had the option to phone the helpline for advice or to find alternative parking.”

Devon Live contacted Iceland and Excel Parking for comment, but has yet to receive a reply.

Mrs Jones said the response has left her ‘very annoyed’.

“I just cannot believe that in all honesty.”

She added: “They were told what had happened, that I wasn’t trying to con them out of a pound, and now I’ve been told to pay £170 with now the threat that if it’s not paid, the bailiffs are coming.

“They threaten county court proceedings, the potential impacts of having a CCJ, a negative impact on your credit rating effect your current employment, although we’re retired anyway, so that’s immaterial.

“They say it will enable enforcement action to commence such as obtaining an attachment of earnings, placing a charge or restriction on property and applying a warrant of execution which will result in bailiffs.

“Where do you go? Do I just ignore it? I’m more concerned about my husband because he’s not fit at the moment to be under this stress.

“This letter is just stupid really. The pound went in, they’ve got the pound which I couldn’t claim back which I would have been able to if I’d got a ticket anyway.

“I thought at the time, I had better things to do than just losing a pound in the machine and after speaking to staff at Iceland they told me it was fine. Somebody is at fault aren’t they?”

Express Online has contacted both Iceland and Excel Parking for a comment.