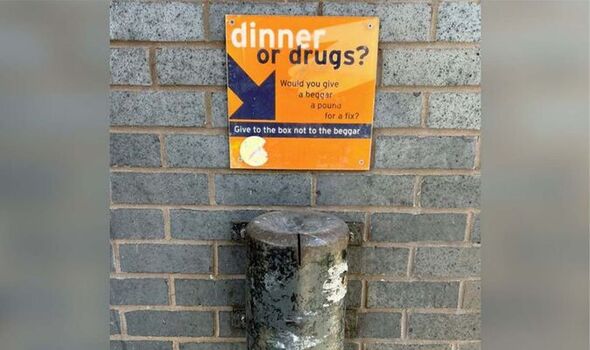 The plaque, spotted in Manchester city centre over the weekend, asks passersby if they would give ‘beggars’ a pound to spend on ‘a fix’. The sign reads: “Dinner or drugs?” followed by: “Would you give a beggar a pound for a fix? Give to the box not to the beggar.” Beneath it is a metal box with a small gap in it for money to be slotted inside.

Manchester Evening News reports that the box was pictured on the wall underneath the arches at the Great Northern Square, in Manchester city centre. The photo of the sign was first shared by Harry Jones on Twitter, who tagged the council and wrote: “This is f****** disgusting?” It is not known how long the sign has been up at the site.

The post was met with fury, with one person responding: “This is f****** gross and […] there’s no indication what charity or whatever the money in the box goes to.” As another added: “This is a disgrace.”

Responding beneath the tweet, Manchester City Council wrote: “Thanks for bringing this to our attention. This is a very old sign and we definitely do not endorse this message, and we’ll be getting it removed ASAP.”

The council have since come forward saying they ‘do not endorse’ the sign and will be looking to have it removed after the Manchester Evening News also brought it to their attention. They added they were not previously aware of the box or where it came from.

A Manchester City Council spokesperson said: “We were not aware of this box nor of its origin and we are grateful to have it brought to our attention. We do not endorse this and are arranging to have it removed.”

The council’s website gives advice to the public on ways they can help with homelessness in the city. This included encouraging the homeless person to make contact with the council, who may help them find suitable accommodation.

The council also works with partner organisations, including Shelter, Centrepoint, Street Support and Manchester Move and encourages the public to volunteer their time or donate money to various charities that help tackle homelessness in the city.