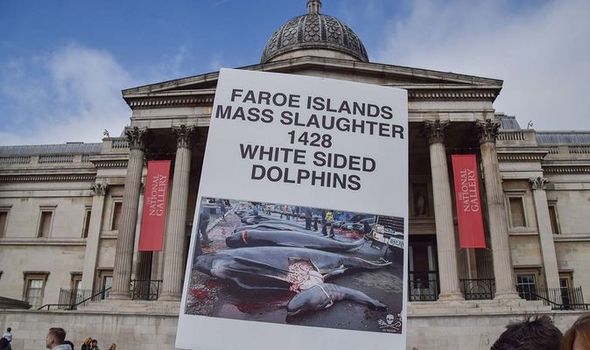 Virginia Crosbie, who was elected as the MP for Anglesey in 2019, cared for dolphins at Woburn Safari Park in Befordshire as a teenager and is now a champion of animal welfare in the Commons.

In September it was reported that 1,400 dolphins were killed in a Faroese hunt which involved boats herding the mammals into shallow waters before being killed.

The legal hunting of whales and dolphins by Faroe islanders is a longstanding source of international controversy.

Ms Crosbie said: “I am appalled by the senseless slaughter of these wonderful animals. When more than 1,300 are killed in one go it is not just for food or for cultural reasons, it is far in excess of that and it is unacceptable in the 21st century.

“As an MP for an island, I know my constituents very much feel the same about what is happening. The images you can find on the internet are heartbreaking.

“I would like our government to do more to put pressure on the Faroe Islands government to stop this barbaric and needlessly cruel practice.”

Romford Conservative MP Andrew Rosindell also pressed for action, saying: “Our relations with the Faroe Islands are strong and enduring. However, we must be willing to call out friends when we see something that goes against our values. “As a nation of animal lovers we must call out the awful practice of slaughtering dolphins and whales.”

Ms Crosbie wants the UK to use economic pressure to protect dolphins and whales, arguing that Britain has clout because we “buy a great deal of fish from the Faroes”.

International trade minister Ranil Jayawardena said: “We are dismayed that the needless slaughter of cetaceans continues around the world. [Environment minister Zac Goldsmith] has written to the fisheries minister of the Faroe Islands to express Britain’s opposition to the continued killing of cetaceans in their waters.

Ms Crosbie described her personal connection to dolphins, saying: “I have a great love and admiration for dolphins that goes way back many years to when I worked with the late and great Terry Nutkin looking after two of these amazing creatures – Sooty and Clyde. Of course, I now do not support keeping dolphins in captivity and that is exactly my point: times have changed except in the Faroe Islands.”

‘It made my skin crawl!’ Prince William slammed for ‘forceful’ and ‘shady’ BBC demand