MADRID — Across much of Europe, Socialist and Social Democratic parties have suffered the fate of many traditional parties. Their once-solid position has been eroded by populist forces and newer parties. The results this week from European Parliament elections mostly confirmed the trend.

But there was one prominent exception: Spain.

Pedro Sánchez, the prime minister, has completed a remarkable comeback by leading his Socialists to victory in national elections on April 28. On Sunday, the Socialists consolidated their gains in Spanish local elections that coincided with those for the European Parliament, finishing first.

The results have now left Mr. Sánchez as the unlikely standard-bearer for a Socialist movement that has crumbled in countries like France, Italy and most recently Germany.

As Mr. Sánchez seeks to form a new Spanish government in coming weeks, his success or failure may become a test of whether Socialism in Europe, outside Scandinavia, has a future after all.

Already, he stands taller on the European stage and is angling to have Spain play a more decisive role in European Union affairs, especially as populists in Italy and elsewhere turn their backs on the bloc.

A day after the elections, Mr. Sánchez went to Paris for a dinner with President Emmanuel Macron of France, who has been pushing for a stronger European Union.

While Mr. Macron was licking his wounds after losing to the nationalist party of Marine Le Pen, Mr. Sánchez sought to convince Mr. Macron that Spain could — and should — help drive the agenda of the European Union.

In fact, Mr. Sánchez was one of the few unabashedly pro-Europe leaders to shine in the elections. In Italy, the traditional center-left Democratic Party managed to stem the erosion of its position, coming in second. But the real victory no doubt went to Matteo Salvini, the euroskeptic populist leader.

In Germany, Chancellor Angela Merkel’s pro-Europe conservative party came in first but slipped badly at the polls, and the Social Democrats had a devastating showing, slumping for the first time behind the Greens. 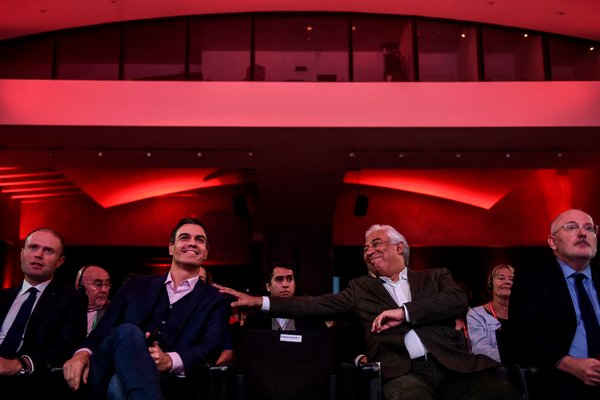 “When you look at what has now also happened in Germany, Spain is the only large European country where Socialism still has a strong presence — and that should give Sánchez good arguments to claim more weight within the institutions of the European Union,” said Aleksandra Sojka, a Polish fellow in political sociology at the Carlos III University in Madrid.

But Mr. Sánchez still has feet of clay at home, having failed to win a parliamentary majority.

That raises the likelihood that his next government will neither be able to start ambitious reforms, nor solve Spain’s territorial conflict in Catalonia, the restive northeastern region that has split down the middle on independence.

Even the task of forming a new government, which Mr. Sánchez could postpone for several weeks, looks arduous at a time of heightened party fragmentation in Spain.

An economist by training, Mr. Sánchez, 47, was almost unknown when he was elected party leader in 2014. Before that, he had entered Parliament through the backdoor, as a substitute for a departing Socialist lawmaker.

But at the time, the Socialists decided to bet on a younger and photogenic leader to turn the page on the debacle of 2011, when Mariano Rajoy and his conservative Popular Party won a landslide election victory.

By the time Spain held its next election in 2015, however, Mr. Sánchez was no longer the new kid on the block. Two other parties had emerged — Podemos and Ciudadanos — and both fielded younger leaders than Mr. Sánchez.

The election shattered Spain’s two-party system, but also left the country in political deadlock. After a second inconclusive election six months later, Mr. Sánchez was unceremoniously removed by his own party, amid stinging personal attacks. In an editorial, El País, Spain’s leading newspaper, called him “a fool without scruples.”

Rejected in Madrid, Mr. Sánchez abandoned his seat in Parliament and took off on a road trip in his Peugeot car to “listen to the citizenship” and reconnect with the party grass roots.

To the dismay of the Socialist heavyweights who had orchestrated his ouster, Mr. Sánchez returned after only seven months to win re-election.

After three years of bitter party infighting, Mr. Sánchez claims in a recent book to have emerged as “an autonomous leader, who can defend his own political project,” largely immune to the kind of pressure that forced his ouster in 2016.

Across the rest of Europe, few other Socialist politicians can aspire to such untroubled leadership.

In neighboring Portugal, another Socialist, António Costa, is seeking re-election in October, after defying the odds to become prime minister in 2015, when he replaced a center-right government in Lisbon by unexpectedly gaining the support of the Communists and another far-left party.

In his book, Mr. Sánchez wrote that he had learned from Mr. Costa about how to use party fragmentation to his advantage. “There are governments in Europe whose main party need not to be the main political force — and they work out,” Mr. Sánchez noted.

Last year, Mr. Sánchez maneuvered to oust Mr. Rajoy in an unexpected vote of no confidence in Parliament timed to an unprecedented court ruling against Mr. Rajoy’s party for operating a slush fund.

Manuel Valls, a former Socialist prime minister of France, said in a recent interview that Mr. Sánchez now seems to run a Socialist Party “with a made-to-measure fit for its leader.”

“I think we have switched from a Spanish Socialist Party that was really a very collective machine to one in which there is more individual protagonism, with a more pragmatic ideology,’’ Mr. Valls said.

He himself is intimately familiar with the perils the Socialists face, having famously declared his own French Socialist party “dead and buried” in 2017, after losing a battle for its leadership.

The party has yet to revive itself, and on Sunday Mr. Valls’s own attempt at a political comeback fell far short when he finished fourth in his bid to become mayor of Barcelona, the Catalan capital, where he was born.

The solid party leadership of Mr. Sánchez contrasts with the weakness of some of his main rivals in Spain, and even if his party holds only a minority in parliament, he may be negotiating from a relative position of strength.

“I don’t think Pedro Sánchez stands out as a leader with an incredible personality, but more as somebody who has shown great resilience and political flair in terms of knowing how grab his opportunities,” said Pablo Simón, a professor of politics at the Carlos III university in Madrid.

Mr. Valls cautioned against expecting Mr. Sánchez to resolve the Catalan crisis soon, or for that matter anticipating that he could lead a broader Socialist revival that could fortify Europe’s decades-old project of unity.

Socialism is clearly not dead in Spain, Mr. Valls acknowledged, but Mr. Sánchez and his Socialists “appear strong because there is not much left elsewhere.”