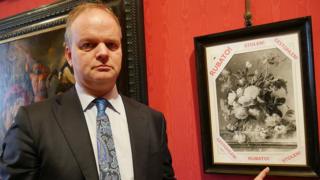 An art gallery in Florence has demanded the return of a painting stolen by Nazi troops in 1943 and now in the hands of a German family.

Uffizi Gallery head Eike Schmidt said the German government had a “moral duty” to help bring the artwork Vase of Flowers back to the museum.

Dutch master Jan van Huysum painted the still life and it was first displayed in Florence in 1824.

But German troops stole the work in 1943 as they retreated north.

Intermediaries for the unidentified family have demanded payment – which the Uffizi refuses – while Germany says a statute of limitations on crimes committed more than 30 years ago stops it from intervening.

“Because of this, the wounds of World War Two and Nazi terror have not yet healed,” Mr Schmidt said in a statement on the gallery’s website.

According to the gallery, Grand Duke Leopold II of Tuscany originally bought the work at the start of the 19th Century.

It was on display for over a century alongside works by other Dutch masters but was evacuated to a nearby village when Italy joined the war in 1940.

German troops then seized it with other paintings as they moved north in 1943 following the Allied invasion of the country.

The painting resurfaced in 1991 following German reunification, but all efforts to return it have failed.

Mr Schmidt – himself German – has called on Germany to abolish the statute of limitations on works stolen by the Nazis so all looted art can return to its “legitimate owners”.

A black and white photo of Vase of Flowers will hang in the gallery – inscribed with the word “stolen” in English, German and Italian – until the original comes back to Florence, he said.