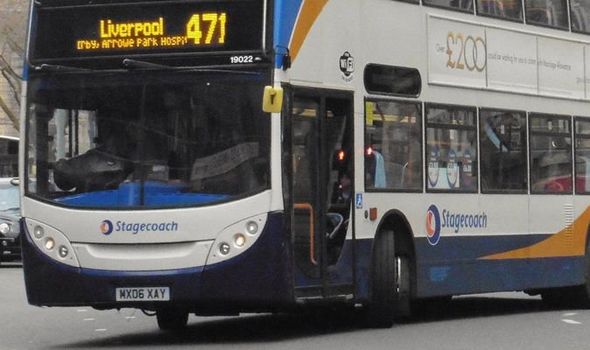 The victim was left covered in blood after the attack on the 471 bus in Liverpool city centre. A terrified passenger said 25 vicious youths surrounded the bus, pushed their way onboard and caused mayhem on Thursday.

The witness, who was a passenger on the bus at the time and did not want to be named, told the Liverpool Echo: “Some lads in tracksuits frantically pushed past and looked nervous, around two went upstairs and two sat downstairs at the back.

“A minute later, a gang of around 25 lads ran to the bus and were screaming ‘get off’ and kicking the side of it looking at the ones upstairs.

“Three of them pushed past the people getting on the bus. A nurse tried to stop them but they pushed her out the way and ran upstairs. They were screaming at the top of there voices and you could hear they were fighting.”

The passenger said they could see on the CCTV camera that one of the gang could be seen punching one of the teenagers upstairs.

After attacking the boy, three of the gang ran from the bus, “pushing a disabled woman over” as they fled.

The witness said: “One of the lads that was originally upstairs came down and shouted ‘they’ve done him in with a hammer’ and said he was pouring with blood. And then other two who were downstairs ran up in a panic, and the nurse who was downstairs ran up too.

“There were two children downstairs who looked frightened and everyone downstairs didn’t know what to do.

“The nurse came down the stairs and was on the phone to the police, meanwhile there was a man screaming at the bus driver asking if we’re going or not, and if he can get off.” 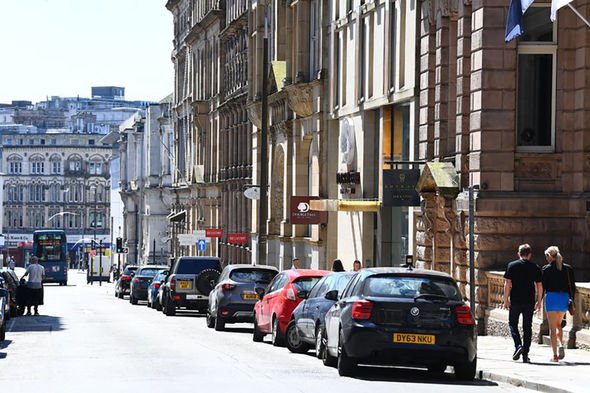 The witness added: “In the moment, everyone was terrified because the bus was surrounded by a gang kicking the bus, and we were more worried for the people upstairs who were in middle of the hammer attack.”

Police arrived on the scene shortly afterwards and the rest of the passengers were asked to get on a bus that had pulled up behind.

Merseyside Police confirmed an assault had taken place, saying a 15-year-old boy had been attacked by an unknown offender and had suffered a swollen lip but didn’t require hospital treatment.

A spokesperson for the force said: “We were contacted at 8.50pm on Thursday, June 3 following reports a 15-year-old boy had been assaulted by an unknown offender onboard a bus on Sir Thomas Street in Liverpool city centre.

“Enquiries into the incident have been carried out.”

The attack happened the day before police put in place a dispersal zone as increasing concerns over gangs of youths intimidating people and causing damage to businesses in Liverpool city centre and waterfront.

Locals had reported witnessing teenagers “setting fire to bins”, “surrounding cars and trying to intimidate drivers” as well as people “throwing half bricks” at dog walkers in recent weeks.

But, speaking previously, Merseyside Police stressed the behaviour “will not be tolerated” and “extra officers will remain in the area to disperse any groups causing such issues”.