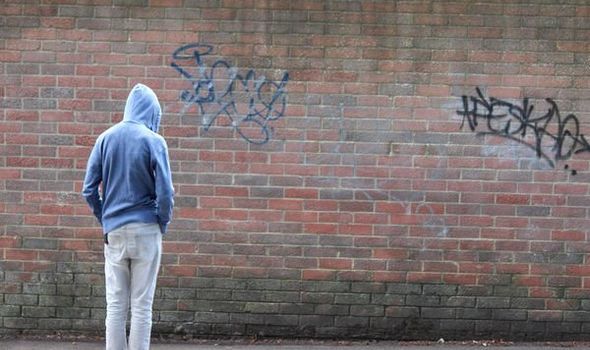 Nearly seven in 10 parents (68 percent) polled by YouGov for St Giles Trust said they were dissatisfied that enough is being done by the Government, charities and schools to combat gang culture amongst young people.

The founder of St Giles SOS Project, which helps youngsters involved in county lines, gangs and other forms of child criminal exploitation, said Britain “needs to step up its efforts”.

Children are often exploited in county lines drug supply, which occurs when a person under 18 years old is coerced, controlled, manipulated or deceived.

Junior Smart, of the SOS project, said: “Child criminal exploitation is changing and unfortunately the exploiters in gangs will switch their tactics.

“One consistency is that it can wreck the lives of the young people caught up in it and those around them.”

The charity has launched a summer campaign to keep children safe from criminal exploitation.

Ebony Pinnock, violence vulnerability and exploitation manager at St Giles said: “ Our staff have direct personal experience of the issues facing their young clients and come from similar backgrounds.

“They are culturally attune with the young people’s realities and experiences and are more likely to understand a young person’s risk of harm.”

The YouGov poll of 1,000 people found nearly half of parents (48 percent) believe raising children is more difficult now compared to 30 years ago, with 21 percent calling it “much harder”.

Experts have cited technologies – like social media or smartphones – as a possible reason for this change.

When asked how often parents knew exactly where their child was, 36 percent said they “always” did, compared to three percent who said “never”.

Four in 10 parents said they “always” knew which friends their children were meeting when unsupervised while 29 percent admitted they “often” knew.

There are an estimated 1,000 county lines in the UK, with some lines relying on the exploitation of as many as 50 children, St Giles said.

The exact numbers of children affected by county lines is unknown as there is currently no systematic data collection.

An estimated 27,000 children in England were gang members in 2019, the Children’s Commissioner said.

At least 91 percent of those involved in county lines are male but females are underrepresented in data and less likely to be discovered by services.

Females may be asked to carry drugs and weapons because they are less likely to be suspected than males, the National Crime Agency (NCA) has said.

Children aged 15 to 17 years are those most commonly identified as victims of county lines exploitation, although those younger and older are also at risk of exploitation.

St Giles has supported 4,500 people under 25 through its specialist services between April 2020 and March 2021.

Meanwhile, 1,704 young people involved with county line child criminal exploitation were helped in the same period – a 53 percent increase on the previous year.

The first specialist support services of this kind, which was launched in August, is aimed at helping young people and their families.

“All of our frontline caseworkers have lived experience of the issues facing their young clients which makes them authentic and credible.

“The pandemic has brought about particular challenges as young people; it has made some young people vulnerable to exploitation.”

The charity has appealed for more support with £25 providing preventative educational sessions to young people at risk of serious youth violence.

While £100 provides one day of “lifesaving” one-to-one mentoring and support to a young person at risk of gang involvement.

To donate and find out more, visit St Giles’s website.

Desmond Skyers has described how “manipulation and coercion” controlled his life from age 15 when he joined a gang.

He told how he engaged with drugs, youth violence and gang wars, and eventually received three life sentences in the US for federal drug conspiracy.

Although born in Lewisham, in London, Desmond’s Jamaican parents decided to move back to the Caribbean country when he was 13 months olds.

He said he was smoking weed by age nine and failing to turn up for school.

Desmond, 59, eventually moved to New York where he began setting up drug dens and distribution class A drugs.

Talking about his experience in a gang, he said: “It’s a lot of exploitation and it’s a lot of coercion and perception – you believe what the [gang leaders] are telling you and what you think you’re seeing.

“At some point fear would set in and a seasoned gang member would know how to make you feel superhuman. When I was scared, I was told not to worry, we’re family and they’ll do everything to protect me.

“I felt like I was part of something, like [the gang] cared for me. But when I went to prison, there was nobody there to support me.”

He spent around 22 years in jail before former president Barack Obama lowered non-violent drug offences in 2015 which immediately released him.

He said: “Entering prison I could barely read. Eight years into my sentence, I began to see life in a different way and I started to see the damage, the lies and the danger of youth violence, criminal gangs and the misuse of drugs and substances. Most importantly, I began to read, returning to school.

“As a result of this change in my thinking and attitude, by the time I left prison I had entered into a college distance learning programme and started on a degree in journalism and mass communication.

“I have written six books and went through all the educational and social programmes that the prison system allows.”

Desmond returned to the UK and volunteered with St Giles’ SOS project where he now mentors and supports young people while sharing his life experiences.

As lockdown lifts, we are back to daily stories of young people being killed in horrific, senseless ways. It cannot be underestimated, we all need to step up our efforts.

That isn’t to ignore the good work already underway. The Home Office has invested £25million into tackling county lines exploitation across the UK.

The Mayor of London is providing county lines interventions for young people across the capital through the Rescue and Response service St Giles is involved in. Police are working with charities like St Giles to improve their knowledge and skills around child criminal exploitation. Schools across the country benefit from our staff – like Des – equipping young people with the skills to stay safe and resilient to exploitation.

I established St Giles’s work with young people involved in criminal exploitation in 2006 on my release from a 10 year prison sentence.

From my own experiences, I knew that only people who have lived this life themselves could really help other young people out of it. This approach remains today and is what we believe gives us the edge.

Our staff are relatable, credible and have cultural competence. They come from the same communities as the young people and have walked in their shoes. Crucially, they know the signs of exploitation to look out for, can intervene early on and raise the alert with other organisations ensuring that we all work together in the young person’s best interests.

We struggle with underfunding and our projects are operating at full capacity. Working at the frontline means our teams are the first to know what is happening on the ground and can be one step ahead. Intervening early on means we can prevent things escalating and becoming a sustained problem. We need everyone’s support to help us stay ahead of the game.

Child criminal exploitation is changing and unfortunately, the exploiters in gangs will switch their tactics. One consistency is that it can wreck the lives of the young people caught up in it and those around them.

This is why we are launching our campaign. Children make up less than 25% of the population but 100 percent of the future.

We should all be concerned that their futures are at risk. By recognising the signs and having honest conversations with our kids, we can keep them safe.