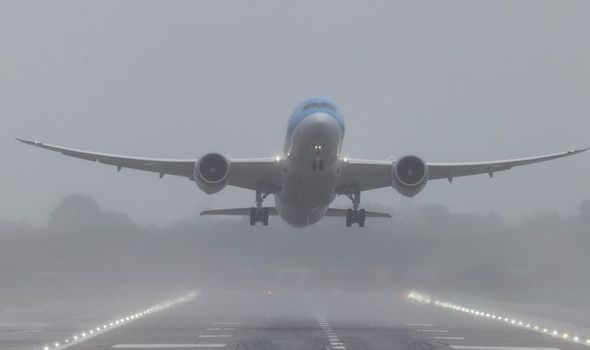 The force confirmed the emergency was not drone-related. They said in a statement: “Sussex Police are currently dealing with an ongoing incident at Gatwick Airport. We will release more information in due course but it is not related to a drone incident.”

It comes as passengers reported being “stuck” on the runway earlier on Sunday.

Taking to Twitter journalist Antonello Guerrera said his flight to Rome was stuck on the runway.

He said: “We’ve just been told by the plane captain that we cannot take off because there is an ‘ongoing emergency’ at Gatwick Airport.”

The reporter later added what the reason might be for the delay.

He said: “I am now told that the reason why we are stuck *might* be an ongoing ’emergency landing’ involving a Turkish airline aircraft in Gatwick.

“A captain of another stuck aircraft told instead about ‘possible debris on the runaway’. Confusing reports.”

In a later update Mr Guerrera confirmed his plane was back on the move but visibility was poor.

He said: “We are now allowed to move on. Taxiing. Terrible visibility though.”

Another Twitter user, About East Grinstead, claimed there was a police presence at the airport.

They said it could be related to “unconfirmed reports of unauthorised drone activity”.

They said: “There clearly was an emergency situation at Gatwick, not being reported, this morning.

“Unconfirmed reports of unauthorised drone activity, but caution advised as it might just be speculation.”

Meghan ‘humiliated’ the Archbishop! Harry attacked for ‘endorsing what she was saying’