Rob Golledge told LBC’s Nick Ferrari the former Defence Secretary was Theresa May’s “closest confidante” for many years but their close relationship became strained when he entered the Ministry of Defence. The former defence adviser said: “He was her closest confidante for many years. He helped her get into the role and he’s certainly kept her there.

“He feels aggrieved at the fact that he was the one who, in her moment of crisis after the 2017 election, came to her rescue and sat down with the DUP and kept the show on the road when there was no majority.

“They had a very close and trusting relationship.

“It’s fair to say that became strained when he entered the Ministry of Defence and there was very public lobbying for money.

“But she still turned to him as recently as the last set of meaningful votes on the withdrawal agreement. She still trusted him and his ability to know the party, to do the numbers in the House of Commons. 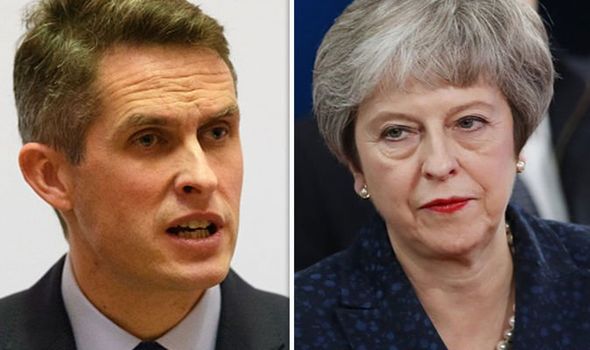 “I think it’s fair to say that because so many wars were opened up with so many government departments, that relationship were strained to the absolute limit.”

The Prime Minister fired Mr Williamson on Wednesday evening over allegations he was responsible for the leaking of cabinet meetings information related to Chinese tech giant Huawei.

Mrs May released a strongly worded letter to him which stated there was “no other, credible version of events” other than to hold him responsible, while Foreign Secretary Jeremy Hunt said she had been left with “no other option”.

The inquiry by Cabinet Secretary Sir Mark Sedwill was launched after information from secret discussions about Chinese telecoms firm Huawei’s involvement in the development of the UK’s 5G mobile network was printed in the Daily Telegraph.

Last week it emerged that Britain would allow Huawei a restricted role in building parts of its 5G network, seeking a middle way in a bitter dispute between the United States and China over the next generation of communications technology.

The NSC is a forum in which senior cabinet ministers discuss top secret national security information, and the leak, first reported in national newspapers, sparked anger in Parliament.

Mr Williamson was listed in the Telegraph as being among a small group of ministers whose warnings about Huawei’s involvement were overruled by the Prime Minister.

The former Defence Secretary adamantly denies any involvement in the leaking of the crucial defence meeting information.