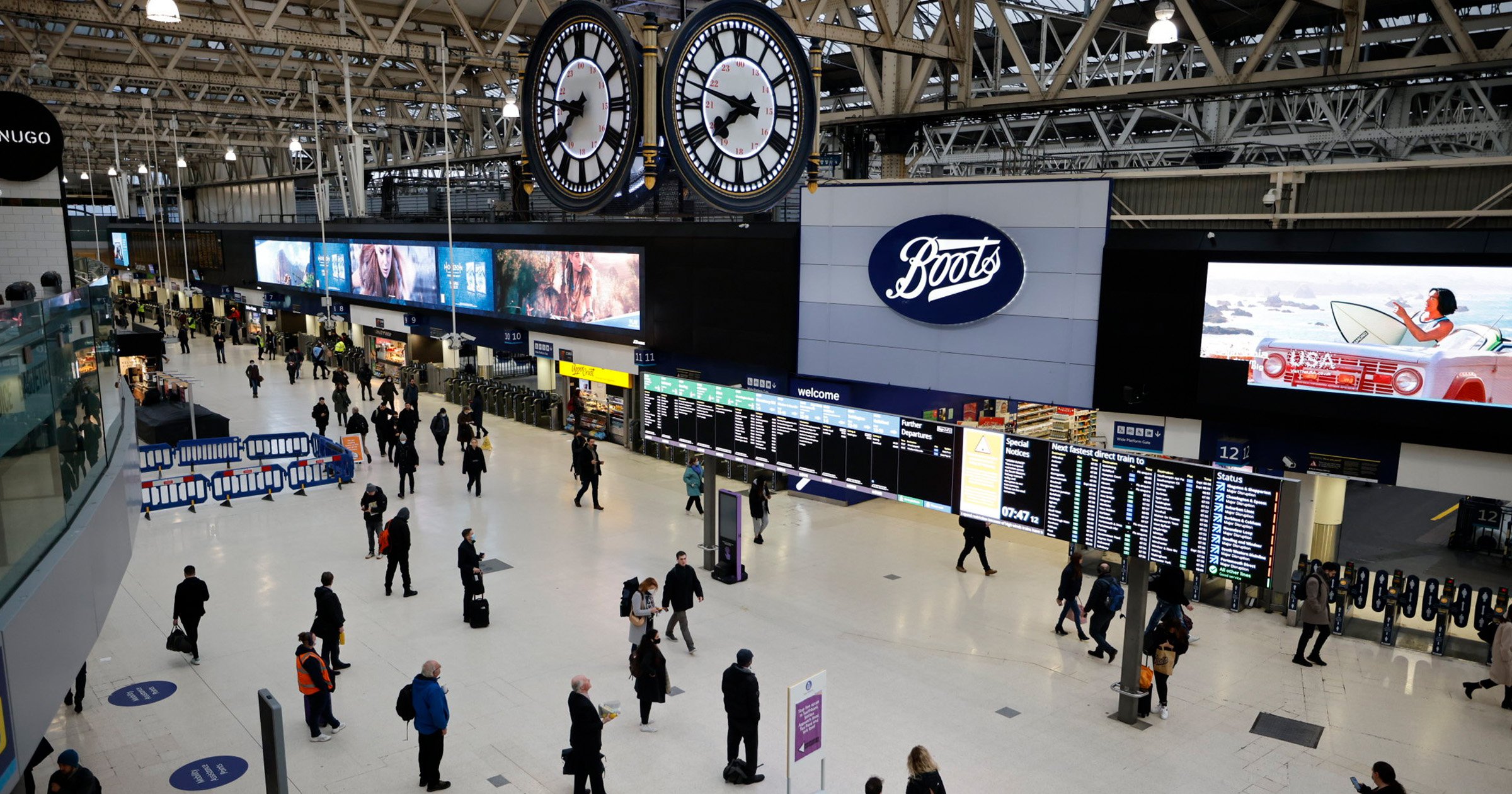 London is set to grind to a standstill on Friday when Storm Eunice batters the capital with 100mph gales.

The Met Office has issued a red weather warning for wind for the East of England, including London, to run from 10am until 3pm.

It is expected to cause ‘significant disruption and dangerous conditions’, with forecasters warning of flying debris, uprooted trees and power lines being blown down.

Commuters were met with nightmare journeys trying to make it into the office amid widespread railway closures, while tourists faced a washout after several parks and attractions shut in anticipation of the adverse weather conditions.

Transport for London (TfL) urged people to avoid non-essential travel in the capital.

A spokeswoman said: ‘Due to the Met Office’s red warning over Storm Eunice, customers are advised to only travel if essential, and those who need to should check before they travel using our website and the TfL Go app.

‘We are doing all we can to ensure we are prepared for any impact with extra staff ready to respond quickly to any incidents, but some services will be affected by the extreme weather.

‘We are also urging Londoners to please take care if they travel around the city.’

A warning on its website states: ‘Due to the probability of trees and debris being blown on to the tracks, we strongly advise you not to travel today.

‘If you do decide to travel then we can’t guarantee that you’ll be able to complete your journey and replacement transport may not be available.’

The company said a 50mph speed restriction on the network will see ‘a number of trains across all Southeastern routes’ cancelled, adding: ‘Because of the nature of the storm, there are likely to be further cancellations, delays and disruption through the day.’

East Midlands Railway advised trains to and from London St Pancras ‘may be withdrawn at short notice’ due to Storm Eunice.

‘You should only travel if your journey is unavoidable,’ the firm added on Twitter.

Parks and attractions in London, including the Royal Botanic Gardens in Kew along with the London Eye and River Cruises, have shut.

Others, such as the Tower of London, are urging customers to check before they travel.

Parks at Hampstead Heath in North London, as well as those in Hammersmith and Fulham and Victoria Park in Tower Hamlets could also close.

The City of London also said its pop-up Covid vaccination centre will be shut and moved to Saturday instead.

National Highways said there is a ‘particularly high risk’ that high-sided vehicles and other ‘vulnerable’ vehicles such as caravans and motorbikes could be blown over.

Those using such vehicles were told not to travel on bridges, viaducts and exposed highways throughout England.

The Queen Elizabeth II bridge on the Dartford Crossing closed at 5am on Friday morning, with southbound traffic instead diverted via the east tunnel.

Airports have insisted they will do ‘everything in their power’ to minimise disruption, but passengers have been warned to brace for delays and cancellations and check their flight status before travelling.

British Airways said the rate of aircraft permitted to land at Heathrow Airport ‘is being reduced due to gale force winds’.

Heathrow Airport wrote on Twitter: ‘High winds and poor weather may cause last-minute delays, but we will do everything in our power to minimise any disruption that results.’

As of 7am on Friday, departures at Gatwick Airport did not appear to have been affected, but a warning on its website states: ‘Due to Storm Eunice we are expecting very high winds on Friday, February 18, which could cause some delays and cancellations to flights.

‘We advise passengers to allow plenty of time to get to the airport and to check the status of their flight with their airline.’

It comes after Storm Dudley caused travel disruption and power cuts to parts of the UK on Wednesday.

The Cobra emergency committee met on Thursday ‘to discuss the response to Storm Dudley and Storm Eunice’ and to plan for power cuts, the Government said, while Prime Minister Boris Johnson said the Army is on standby.