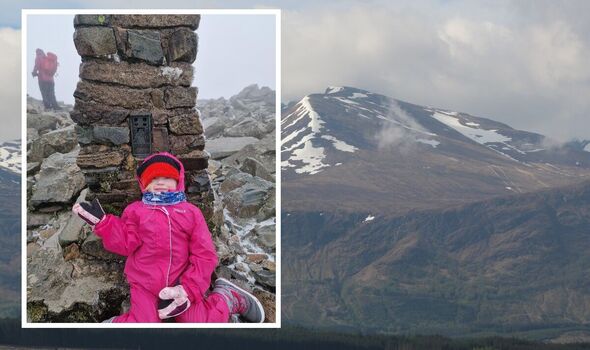 A five-year-old became the youngest girl to hike up the tallest peaks in England, Scotland and Wales in under 48 hours. Seren Isla Price from Llangennech, Carmarthenshire, Wales, trekked up Ben Nevis in Scotland, Snowdon and Scafell Pike in the Lake District with her dad. The girl even helped with a mountain rescue on her journey after the pair spotted a walker who needed support getting down one of the mountains.

Little Seren and her dad were near the top of Ben Nevis when they spotted hikers huddling around a woman.

She was quick to react and led the group in the right direction with her torch and offered a woman a Lucozade drink for an emergency energy boost.

Her dad Glyn said: “She needed help going down the mountain, we called mountain rescue as she was quite fatigued and they were working their way up from the bottom.

“It took about two hours to get her down the zigzag path, down to the reservoir where the mountain rescue meet us with the air ambulance.

“Seren was brilliant in the fact she gave Lucozade to the lady to help give her energy and was helping her down the mountain.”

Her challenge involved climbing the three mountains consecutively – something she aimed to do in under 24 hours but was delayed by the rescue. This meant she may have been unable to complete the official National Three Peaks Challenge, which involves doing them in under one day and night.

The brave mountain climber started her craft at only three years old and had already submitted the Welsh three peaks before this adventure.

During the Wales challenge, she faced temperatures as low as minus 10 degrees Celsius.

She called the recent challenge “very difficult” yet has plans to take on greater exhibitions in the future.

The pair are looking to climb Mount Kilimanjaro, Mount Everest base camp, and scale North Africa’s Mount Toubkal in the future.

Seren was able to raise just under £800 for Birmingham Children’s Hospital which helped her when she was a baby.

Other young children, including a five-year-old, have completed the tricky challenge.

Jaxon Krzysik, who has cerebral palsy, broke the record for the youngest boy to climb the three peaks set by Lucas Lawrenson, six, who managed to climb all three mountains within 24 hours in 2019.

On separate days, he climbed the three mountains in a total of seven hours, while not being carried once.

Harry Dunn’s alleged killer Anne Sacoolas could have been ‘distracted by her phone’, lawyers claim