And on top of New Year gongs, the Euro 2022 champions – many earning in a year what a male Premier League star does in a week – are set to receive new sponsorship opportunities, a Royal reception and hometown accolades. 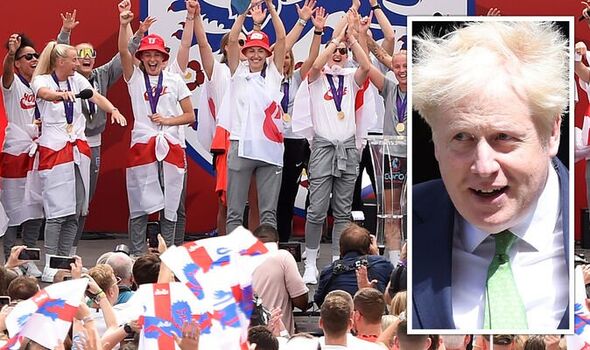 The Prime Minister stressed he “definitely” wants England to have “the recognition they deserve” after bringing joy to the nation with a thrilling 2-1 extra-time triumph over Germany, No 10 said.

Mr Johnson’s official spokesman added: “With honours, there is obviously a process that is a matter for the independent committee, but clearly the public want to see the Lionesses receive recognition.”

A reception at Downing Street or a bank holiday to add some icing to the Lionesses’ layer cake of glory have been ruled out. The latter was said to be a “considerable” cost for the economy.

But gongs-wise, a Government source highlighted how tennis ace Emma Raducanu was a late add to the honours list last year after winning the US Open in September. Inspirational skipper Leah Williamson, 25, and Golden Boot winner Beth Mead, 27, are tipped for the most senior accolades.

There is also likely to be an ­honorary award for manager and tactical genius Sarina Wiegman, 52, who as a Dutch citizen is not ­eligible for British medals.

Former Three Lions striker Wright, 58, cited the example of the England cricket team who were honoured after they won the World Cup in 2019. He added: “They should be thinking about that because this team deserve every accolade, everything that can be bestowed.”

The clamour for recognition for Wiegman’s stars – who revelled in yesterday’s Trafalgar Square party – follows record-breaking success. The 87,192 Wembley attendance was a new high for any Euros match, men or women.

And the game attracted a peak TV audience of 17.4 million – with an additional 5.9 million streaming via BBC iPlayer and its sport ­website – a record for a women’s football match in the UK. It was also the biggest UK television event of the year to date.

Tory MP Esther McVey said: “The Lionesses are role models – all deserving of an honour and a victory bus parade.”

Former Spice Girl and mum of two Geri Horner, 49, who watched the victory at Wembley, told the Daily Express: “It was an absolute privilege to witness a monumental moment. An example of determination, teamwork and girl power!”

The Royal Family are eager to honour England’s players with an autumn palace reception. Prince William, who presented the Euro 2022 trophy and winners’ medals as President of the FA on Sunday, is most likely to host.

And the prospect of the Queen, who sent fulsome congratulations, meeting the Lionesses has not been ruled out, despite her increasing mobility problems, especially if an event is held at Windsor Castle where she now resides. 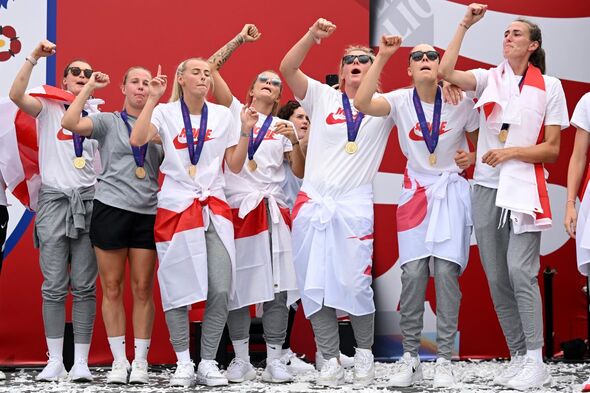 The Government has announced that all 23 squad stars will have sports facilities named after them in their home towns. And many communities have already feted their heroines.

Defender Lucy Bronze, 30, is set to receive the Freedom of Northumberland, with county councillor Guy Renner-Thompson tweeting: “This motion will be voted on at the September meeting of all councillors.”

And Williamson will be the first ­person to receive the Freedom of Milton Keynes since it became a city to mark the Platinum Jubilee.

Supersub Alessia Russo, 23, is also in line for “honoured recognition” from her old stomping ground in Maidstone, Kent, although town hall officials could not yet say what it would be. Midfielder Fran Kirby, 29, was praised by her hometown Reading, whose council leader Jason Brock said the region felt “honoured” she was a local Lioness.

Meanwhile, endorsements are set to soar in the women’s game, which is a comparative pauper compared to the bonanza in the men’s domestic and international arenas.

Brands have flocked to the squad, with Williamson recently signing up with designer fashion giant Gucci and Bronze striking deals with Pepsi, EE and Visa. Zoe Burton of Deloitte’s sports division said: “The record audience figures that the Euros have attracted is a clear indicator to brands that the women’s game has now entered the mainstream.”