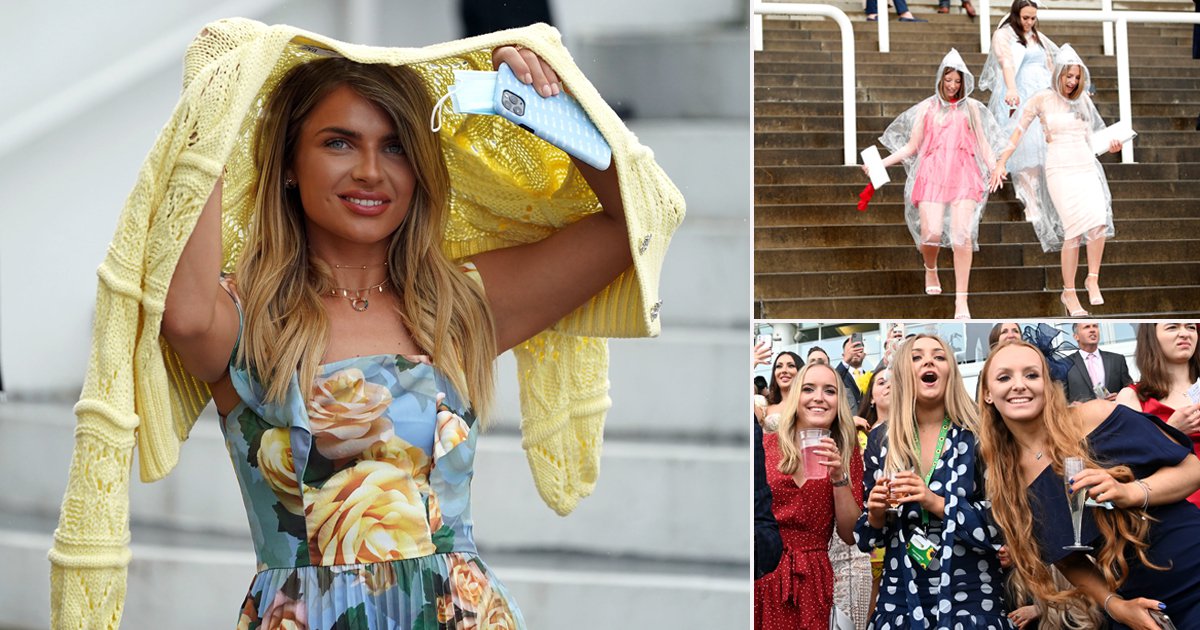 The annual tradition returned this year with 4,000 guests allowed back into the famous Surrey racetrack.

But, after a week of sunshine, the heavens opened meaning the glamorous occasion was something of a wash-out.

The event sees women don their best hats, dresses and heels for a day out at the horses.

But these outfits are not always conducive to rain and mud, as some found out to their cost.

Umbrellas saved the day for many while others choose less conventional ways to protect themselves, including plastic bags and ponchos.

There were a few who ditched the extravagant footwear in favour of flip flops and sandals.

Much of the south east saw strong showers on Friday and temperatures plummeted to around 13C in some areas for the end of half-term.

The third day of the Test match between England and New Zealand at Lord’s was also washed out because of the weather.

Some 100,000 people usually gather on the hill overlooking the Epsom track to watch the races but it’s been closed off this year because of Covid.

In ticketed areas, the number of spectators is being limited to a quarter of its normal capacity.

The Queen is among those who have chosen to stay away this year because of the restrictions in place.

While race-goers on Friday refused to let the weather dampen their day, there’s better news for those heading to Epsom for Derby day on Saturday.

The start of the weekend could bring some showers in Northern Ireland and western Scotland, while most of England, Wales and eastern Scotland will see fine conditions.

‘It will be a pretty good day for most areas, and certainly a warmer day for the south east tomorrow, where it could get to 25C or 26C,’ Mr Petagna said.

Temperatures are set to remain broadly similar on Sunday, with the potential of 25C in the south-east of England, while there could be a scattered showers across parts of the UK.

Coronavirus: You MUST wear a mask in shops and supermarkets from next week, says Boris