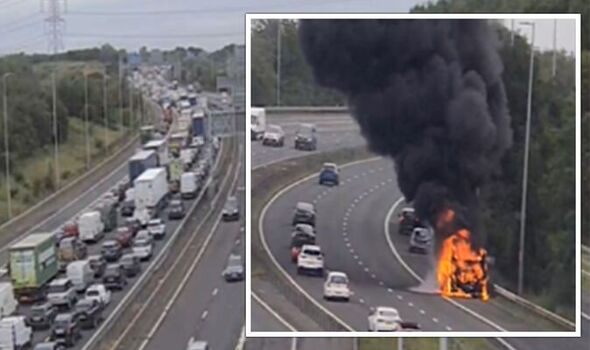 An image shared by Traffic Scotland shows a vehicle engulfed by flames on the hard shoulder of the M74, with a column of black smoke rising from the fire. Emergency services rushed to the scene around 10.35am. The accident forced the closure of the motorway northbound between Junction 3 (Carmyle Avenue Interchange) and 3a (Daldowie Interchange) this morning.

Police Scotland said no passengers were on board the bus.

“Emergency services are in attendance.”

The Scottish Fire and Rescue Service confirmed three appliances are in attendance.

A spokesperson said: “We were alerted at 10.33am on Monday, 22 August to reports of a bus on fire on the M74 Northbound.

“There are no reported casualties.”

There are no reports of any injuries, either, emergency services said.

Traffic Scotland warned motorists in the Scottish city that the northbound carriageway of the M74, at Junction 3, near Carmyle, is restricted due to the accident.

Nicola Sturgeon on brink of SNP rebellion over pact with Greens: ‘Dangerous!’