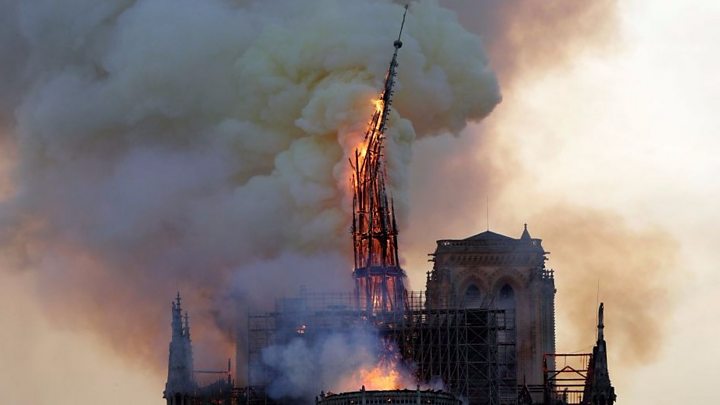 France is to invite architects from around the world to submit their designs for a new spire to sit atop a renovated Notre-Dame cathedral.

Prime Minister Edouard Philippe told reporters they hoped for “a new spire that is adapted to the techniques and the challenges of our era”.

The spire was completely destroyed in the blaze that tore through the 850-year-old Gothic building’s roof.

The entire cathedral was minutes away from total destruction, officials say.

However, much of the Parisian building – including its famed towers – survived, and thoughts have now turned to how to reconstruct what has been lost.

President Emmanuel Macron vowed it will be rebuilt “even more beautifully”, adding that he wants the work done within five years – although experts warn its reconstruction could take decades.

But Mr Philippe posed the question of “whether we should even recreate the spire as it was conceived by [French architect] Viollet-le-Duc… or if, as is often the case in the evolution of heritage, we should endow Notre-Dame with a new spire”.

A combined €800m ($902m; £692m) has already been pledged by a number of companies and business tycoons to help rebuild the Unesco World Heritage site.

The cause of the fire is unknown but an investigation is under way.

What is the damage?

The blaze – which was discovered at 18:43 (16:43 GMT) on Monday and was not fully extinguished until almost 15 hours later – destroyed most of the cathedral’s roof and led to the collapse of its iconic spire.

Experts have not yet been allowed on site to assess the damage and firefighters have used a drone to survey the scale of the destruction.

Photos appear to show that at least one of the famed rose windows has survived but there are concerns for some of the other stained-glass windows. The 18th Century organ has not been burned but it is not clear whether it is damaged.

It was still too early to estimate the cost of the damage, said the Fondation du Patrimoine, an independent non-profit heritage group.

Deputy Interior Minister Laurent Nuñez said the structure was in good condition “overall” but that “some vulnerabilities” had been identified in the stone vaults and the remainder of the ceiling.

The main structure, including the two bell towers, was saved in a time window of 15 to 30 minutes by a team of 400 firefighters, he said.

In his speech Mr Macron heaped praise on the fire services, saying they took “extreme risks” to tackle the blaze.

Investigators trying to establish the cause of the fire have begun questioning workers from five companies involved in the extensive renovations that were under way at the cathedral. Officials believe the works could be linked to the disaster.

“Nothing indicates this was a deliberate act,” said public prosecutor Rémy Heitz, adding that he expected to be a “long and complex” case.

Offers of help to rebuild the cathedral have come from several world leaders, groups and individuals, including:

Culture Minister Franck Riester said some of the artwork and religious items rescued would be sent to the Louvre museum where they would be kept and eventually restored. 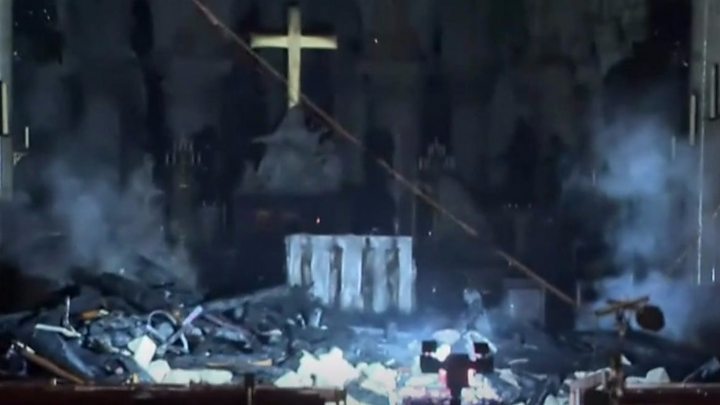 They include what is said to be the crown of thorns worn by Jesus before his crucifixion and a tunic King Louis IX is said to have worn when he brought the crown to Paris.

The cathedral’s paintings would be removed from Friday, Mr Riester said.