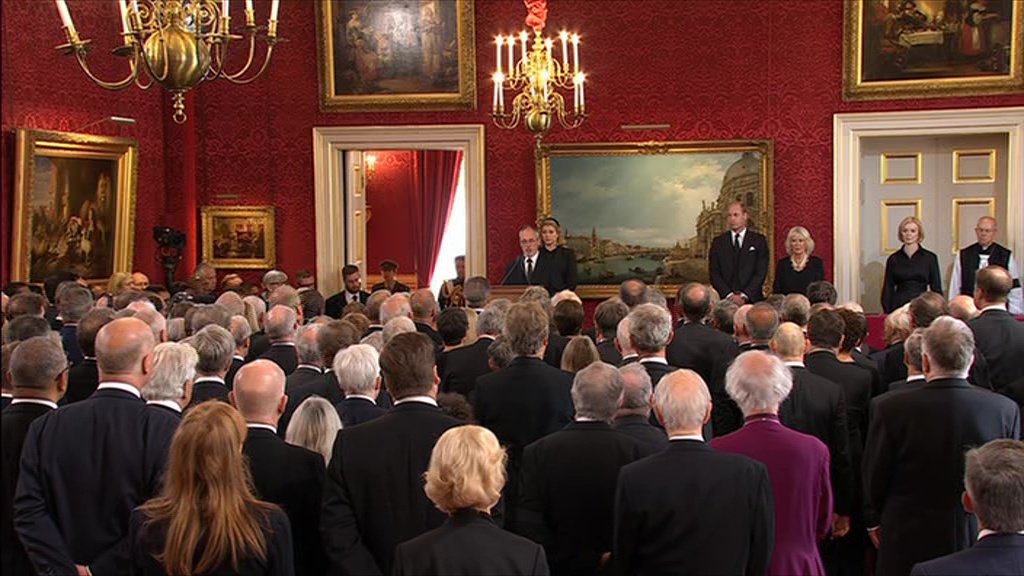 Charles III has been officially proclaimed as king in the first ever ceremony of its kind to be televised.

Senior politicians and other public figures gathered in London today to formally announce the death of Queen Elizabeth II and proclaim her son as sovereign.

‘God save the King!’ they said in unison, before the signing of a document to confirm this.

Under common law, Charles became king at the exact moment his mother died on Thursday afternoon.

However, there will now be a number of formal ceremonies to mark the transition, most notably the Accession and Coronation.

It is the first Accession Council in over seventy years, and for the first time, TV cameras have been allowed inside to see the ancient ceremony – one of the first changes to convention instigated by the new King.

Following the announcement, King Charles attended the council where he spoke of the inspiring example set by his mother, saying: ‘I know how deeply you and the entire nation, and I think I may say the whole world, sympathise with me in this irreparable loss we have all suffered’.

He said he would carry out ‘the heavy task that has been laid upon me’ and would dedicate what remains of his life to it.

After some brief more personal words, he made a formal ‘declaration’ regarding the Queen’s death and took an oath to ‘protect’ the Church of Scotland, which is separate from the Church of England. This oath will be symbolic of the union between England and Scotland since 1707.

A proclamation will be read from the balcony overlooking Friary Court at St James’s Palace at 11am, followed by a second proclamation at 12pm read at the Royal Exchange

Later, privy councillors (who can include senior politicians, archbishops and judges) will travel to Buckingham Palace for an audience with the monarch.

He will sign two documents, witnessed by his wife Camilla and heir William.

Ms Truss, who was invited to form a Government by the late Queen on Tuesday, had her initial audience with the King on Friday.

The Prime Minister curtsied as she was ushered in by a Palace aide for the first of what will be their regular weekly encounters.

As she offered her condolences, the King shook her hand and thanked her, saying: ‘You are very kind for coming – I know how busy you are.’

He added: ‘But it’s been so touching this afternoon when we arrived here, all those people come to give their condolences.’

He replied: ‘You are very kind. It was the moment I have been dreading, as I know a lot of people have. We’ll try to keep everything going. Come, come have a seat.’

Earlier, the Prime Minister had led tributes in the House of Commons to the Queen as she urged the country to support their new monarch.

Those tributes will continue during rare Saturday sittings of both the Commons and the House of Lords.

Proceedings in the lower chamber will begin at 1pm with a small number of senior MPs taking an oath of allegiance to the King, and are expect to continue to around 10pm.