Home » Europe » Going ahead with June 21 'freedom day' would be 'foolish', expert warns 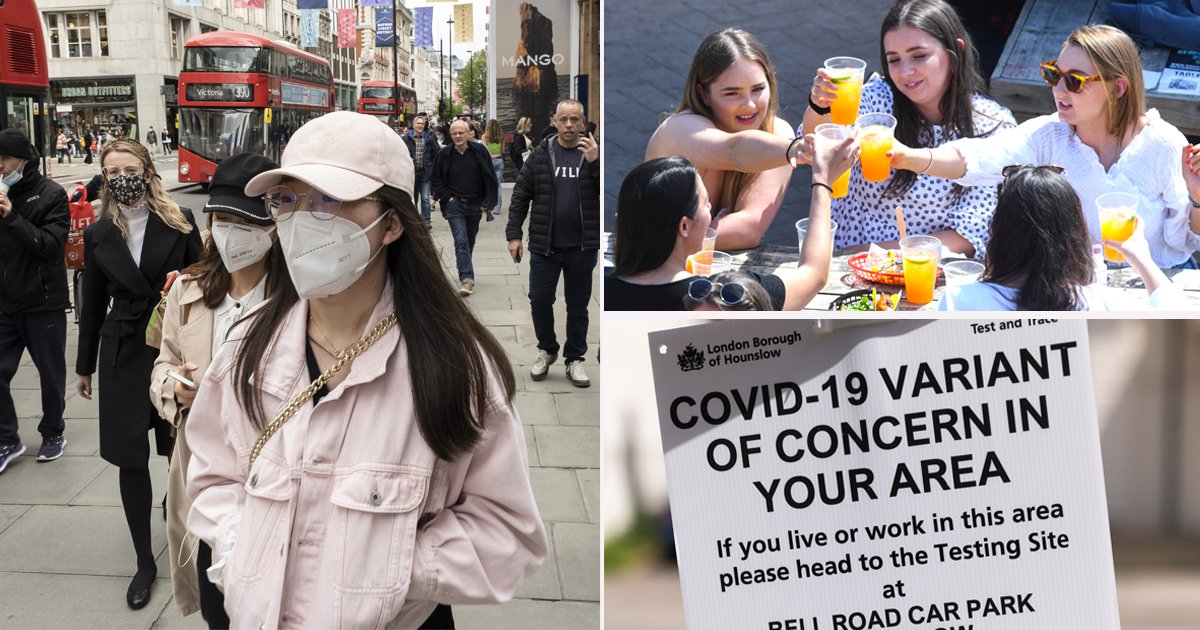 Pushing ahead with full lifting of lockdown later this month would be ‘foolish’, a behaviour expert has warned.

Professor Stephen Reicher says sticking with the June 21 ‘freedom day’ would be a ‘major risk’ in light of the Indian Covid variant and rising cases.

Deaths are still much lower than earlier this year and 40million people have had at least one dose of the vaccine, giving people some reassurance.

But Professor Reicher says there is enough evidence the spread of the India variant —  recently renamed the Delta strain —  means one of the Government’s four key tests for its ‘roadmap’ out of lockdown has not been met.

Multiple reports have suggested plans to lift all restrictions on June 21 could be scaled down, meaning social distancing and face masks could stick around for longer.

Today another 5,767 infections were recorded, casting doubt on whether Boris Johnson’s plan to end restrictions can go ahead after all.

This was down from 6,238 yesterday — the highest number of cases since late March.

Meanwhile figures from the Office for National Statistics (ONS) suggested the number of people who had the virus in England has increased by around three-quarters in a week.

This takes it to its highest tally since mid-April, with the R value between 1 and 1.2.

Professor Reicher, a member of the Scientific Pandemic Insights Group on Behaviours (Spi-B) which advises the Government, said: ‘I think by the Government’s own criteria it’s quite clear that it would be foolish to proceed on the data that we’ve got at the moment. The risk would be very great indeed.

‘And of course it’s a balance of risks but I think it would be a major risk to go further in opening up.

‘Again, I make the point that it is about data not dates, and if you make it too much about the dates then you box yourself into a corner and I think that’s what the Government has done.’

A UK Government spokeswoman said ‘no decision’ had been made on whether to ease all coronavirus restrictions on June 21, amid reports Boris Johnson could delay the move by at least a fortnight.

She added: ‘As the Prime Minister has set out, we can see nothing in the data at the moment to suggest that we need to deviate from the roadmap.

‘We continue to look at the data and the latest scientific evidence and no decision on Step 4 has yet been made.’

Professor Reicher’s comments come as more surge testing is to be rolled out in another part of the country amid community spread of the Delta variant.

Everyone aged 12 and above in some postcodes in Reading and Wokingham are being offered PCR testing from Monday.

Meradin Peachey, director of public health for Berkshire West, said cases are mainly among young people, with ‘virtually nobody over 60 or anyone who has been vaccinated’.

She told BBC Breakfast: ‘If the variant spreads and becomes even more, it may mutate again and the big concern is that vaccines won’t work and that’s my big concern.’

Dr Mike Tildesley, a member of the Scientific Pandemic Influenza Group on Modelling (Spi-M) Government advisory panel, said the Government has a ‘difficult call’ to make about easing restrictions on June 21.

He told Times Radio: ‘The difficult situation the Government have is of course if you delay that then of course you’ll get a smaller subsequent wave.

‘Of course, if you delay that we know that negatively impacts businesses, people’s livelihoods, and so forth.’

Hospitality chiefs have already voiced concerns over a delay to restrictions being lifted, saying it could threaten the viability of the sector.

Sacha Lord, night time economy adviser for Greater Manchester, branded June 21 a ‘make or break’ date for many and vowed that he was ‘up for a fight’ over the possible shift in timeline.

According to reports, a two-week delay to the final stage of Johnson’s roadmap will be used to accelerate second jabs for over-40s, moving from a 12 to eight-week gap between doses, echoing the practise that is already in place for over-50s.

It is also said that people aged over-25 will also be offered their first doses from next week.

A study from the Francis Crick Institute has shown that after just one dose of the Pfizer jab, people are less likely to develop antibody levels against the Indian (B.1.617.2) variant as high as those seen against the previously dominant Kent variant, which has been dubbed Alpha.

Dr Rosalind Eggo, also a member Spi-M, said with ‘very early evidence’ showing that the current vaccines on offer ‘don’t work quite as well against the Delta variant’, it was important to increase the rate of second jabs.

He told BBC’s Newsnight: ‘Getting those second doses up, pushing that number up as high as possible is really important.’

Professor Anthony Harnden, deputy chairman of the Joint Committee on Vaccination (JCVI) said no decision on reducing the gap between doses for the over 40s had been taken but was likely to be made ‘in the next few weeks’.