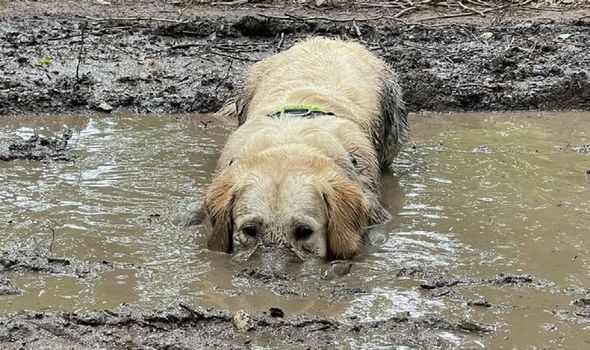 Murphy seems to have a built in radar honing out the muddiest puddles for him to dive in. His latest antics came when he was out on a walk at Blackwood Forest in Hampshire, when his owner Gill Smith discovered him up to his usual messy tricks, the Mirror reports. Goldie owners often refer to a ‘muck radar’ the breed seems to instinctively have, but Murphy has taken this to the next level. The 16-month-old dog loves nothing more than wallowing in a pit of mud to cool off on a warm day.

Gill said: “From about six months old he was rolling around in puddles. He still hasn’t completely rolled, that joy is yet to come. But once he’s found it and he’s in, then it’s too late, but my view is let him enjoy it, as he clearly does. He can run miles, past many puddles and potential pools and then he finds ‘the one’ and launches himself in – he has a few favourite local ones.”

Murphy decided to plonk himself down in a muddy stream, coating two thirds of his body in mud. Gill said: “I think I’m safe to say that most owners find their goldies are a hippo hybrid. Goldies have some kind of muck radar. He was running down a track and suddenly turned right through the bushes – and that’s where I found him, absolutely loving it.”

Murphy joined the family after they sadly lost their chocolate Labrador. That desire to have a companion and friend on four legs was back and Gill, who is co director of her company ‘Editorial Office’, managed to convince her business partner and best friend into having Murphy’s sibling, called Beanbag.

Now they both go on muddy walks together and have fun playing in fields looking for their next dive.

Gill said: “They are both loopy and funny, cuddly and sweet. We’d not be without them.”

You’d think the clean-up process would be a hard job but Murphy quite enjoys getting hosed down.

But he thinks it’s a game as Gill has to chase him around to get him clean.

She said: “If it’s wet and foul outside or he’s found a smelly thing to play in then he knows about it – it’s the slow walk to the shower to get the full shampoo and set treatment.

“He also likes following the lawn mower and face planting in the newly cut grass which just results in Kermit the Dog.”

UK school closures: Pupils ‘frightened’ for family as they say goodbye to headteacher