Michael Gove revealed Michel Barnier’s current strategies for securing fishing rights for the EU in a post-Brexit trade deal with the UK. During the European Union Select Committee meeting, Lord Teverson questioned whether the UK would ever be able to find common ground with the EU regarding fisheries. Mr Gove admitted fisheries remained a contentious issue for many nations, particularly those in Britain who voted for Brexit.

Mr Gove then explained Mr Barnier may be looking for alternative methods to solve the crisis surrounding fishing waters in the trade talks after realising Britain may not easily agree to the EU’s demands.

Mr Gove said: “It is interesting that, as we understand it, Michel Barnier had a call with the fisheries ministers of various nations earlier this week, and he may or may not have been seeking some flexibility from them.”

He added: “Whether we are inflexible, or they are resolute, or they are stubborn and we are principled – whichever way you cut it – there is… a stand-off there.” 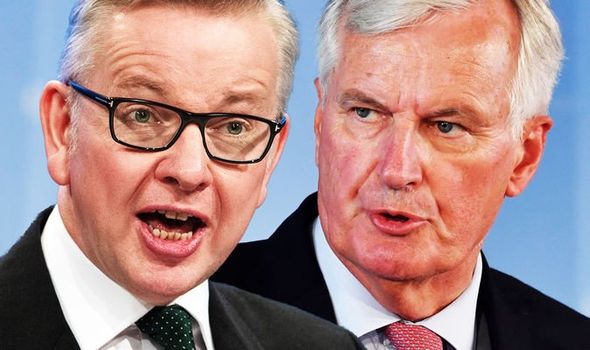 Mr Gove also outlined Michel Barnier’s attitudes towards agreeing on a new fishing deal with the UK during the Brexit trade talks.

“But one of the contentions that David has made, which I strongly agree with, is that they are looking to the past.

“Stock management and climate have changed what is happening in our waters.

“We want to use methods that would accurately reflect where the stocks are and what their conservation conditions is.

Mr Gove also insisted he did not want to be overly critical of the other nations and their demands.

He said: “I don’t want to be unduly critical, if I was the Irish or Danish fisheries Minister I would fight for my sector as well.

“But I do think this is an area of real difficulty.”

During the Committee meeting, the UK’s chief Brexit negotiator David Frost insisted the UK would keep to the current schedule and deadline on the Brexit trade deal.

He added, regardless of the success or failure of the trade deal talks, the UK would be leaving the transition period at the end of the year.

This comes after Michel Barnier sent a letter to Remainer Party’s explaining the EU would be open to a two year Brexit delay.