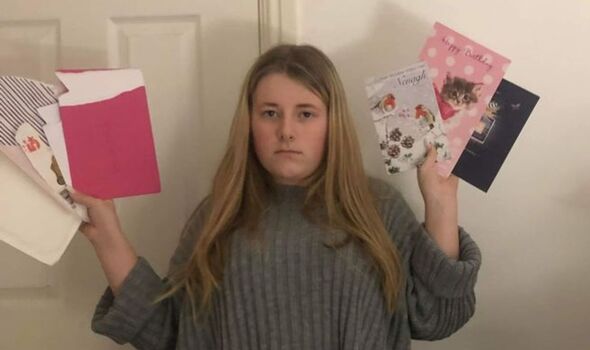 A woman says she and her daughter are disgusted after receiving a package from family that had been torn open and had money removed.

Wendy, who did not wish to include her surname due to work, claims her daughter called her in tears after the vandalised parcel filled with Christmas and birthday cards was delivered.

The cards arrived from Ireland to Huddersfield, and immediately, Wendy’s daughter Michelle knew something was wrong.

The package had been ripped open, and each card inside had also been opened, with around £80 stolen.

Royal Mail has since offered £20 in compensation for the loss.

Wendy told Yorkshire Live: “I went to pick my granddaughter up to go into town to get the last Christmas presents and my eldest daughter Michelle was upset and she said she had just received the parcel in the post.

“Inside the envelope were cards with Christmas cards in and it had been taped over again, Michelle said that every card had been ripped open and they had put it back in the envelope and sealed it up again, with brown tape, it looked disgusting.

“My daughter just could not believe it, she just opened the envelope as normal, there were quite a lot of cards, and she just couldn’t understand it.”

The family say it is an insult that someone would go to such lengths.

Wendy said: “She was in tears, it wasn’t even the money it was the fact that somebody went to this length, we’d have rather that the envelope went missing in transit.

“The fact they put it all back in the envelope and resealed it and sent it on is the insult.”

Wendy’s daughter Michelle has a non-verbal autistic son called Thomas and they say the whole event has been upsetting for the family.

Wendy added: “It’s not just the money, I am fortunate we don’t need the money but it’s the fact that people out there will be relying on it, I don’t think it is a one-off, I think someone is targeting somebody.

“I am just worried that this is happening to other people, ruthless people cashing in on children, I don’t think we are the only household in this area that have been affected.”

A Royal Mail spokesperson said: “We are very sorry for the disappointment expressed by these customers.

“The security of our customers’ mail is among our top priorities, and it is unclear what happened on this occasion.

“We understand that this parcel was sent to the UK from Ireland and so would have been sent with An Post rather than with Royal Mail, and our normal advice would therefore be for the sender to contact An Post rather than Royal Mail about this matter, including any potential request for compensation.

“Despite this, we are seeking to contact the recipients of this parcel in Huddersfield, to discuss their complaint further, as we wish to help our customers if we possibly can.

“Our website advises customers on how to securely send money, at How to post money, jewellery and valuables in the UK (royalmail.com).”